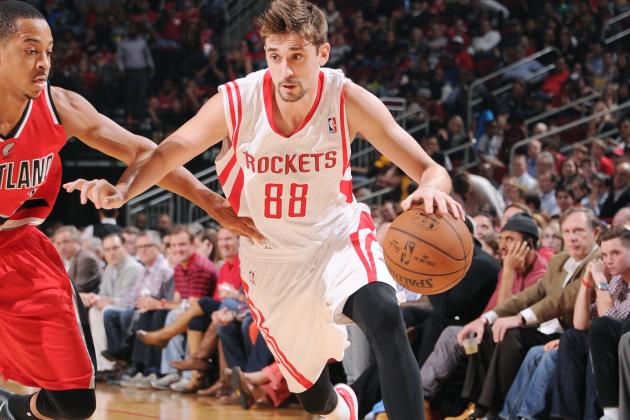 While other NBA teams are mulling over franchise-altering trades, the New York Knicks made a low-key deal at the trade deadline in moving veteran point guard Pablo Prigioni to the Houston Rockets for Alexey Shved and two second round draft picks.

The 26-year-old Shved was acquired by Houston from Philadelphia earlier this year. In 9 games with the Rockets, he’s averaged 3.2 points, 0.3 assists and 0.4 rebounds in 6.6 minutes per game. For the season, the Russian point guard is averaging 7.6 points, 1.9 assists, and 1 rebound on 39% shooting.

Before the All-Star break, Prigioni had not played in eight of the last 12 games, fueling rumors he was on the trade block.

Prigioni  will be joining a play-off bound Rockets team that is currently fourth in the Western Conference with a 36-17 record.

This Was a great experience and it will always stay with me!! I wish the organization all the best in the future

No more sneaky steals and spot-up three-point shooting in NY. Prigioni will be missed, but this is yet another move that benefits both parties. The Knicks get another young point guard to try to mold, and Prigioni gets to join a contender where his sticky hands and floor leadership will be well-served in spot minutes.

Shved is a 6’6 point guard and I’m sure we can put that to good use. His recent teams have given up on his potential, so hopefully he views this as a “last shot” of sorts to show he’s a valuable player.

A toast to Prigioni.

Thank God that Rockets are in the Western Conference. Last night, Houston blew out New York for the second time this season. Don’t be fooled by the 13-point spread the game finally settled on — this one was never close from the third quarter on. We can somewhat rest our head on the fact Melo didn’t play, but there were still a few alarming trends that need to be addressed as the season progresses.

Defense of Our First 10 Games Needs to Return: James Harden (28 points) and Jeremy Lin (22 points) were among the Houston guards that were able to get to the pain at will. While you expect someone like the 39-year-old Jason Kidd to struggle keeping up with the younger guards, some of the defensive lapses by the likes of Raymond Felton and JR Smith were unacceptable. The second quarter pretty much lost us the game as the Knicks were outscored 27-11. No, I forgot about in the third when we cut it to just a five-point game (55-60) before allowing the Rockets to go on a 15-0 run over a 3-minute stretch (I got a little sick just writing that). We can’t put it all on Iman Shumpert’s return, but it’s games like this were you remember his defensive presence with longing. Just one more month…

No Energy: You would think after the Rockets gave us our worst loss of the season last month that we’d be up for this game. Tyson Chandler admitted afterward that the effort was just not there. This wasn’t as embarrassing as the first loss due to the circumstances, but this defeat flies in the face of all the intensity we’ve shown in our previous home games.

Come back, Melo!: Word is Melo is back to regular practices and should be a go for the Brooklyn game tomorrow night. Some people were getting a little beside themselves after we beat Miami without Melo by 20. I heard people claiming that we could win regularly without our star player. This game should bring those few fans back down to earth. For us to win without Melo, we damn near have to play a flawless game of hot shooting, minimal turnovers and good defense. If any of those is missing disaster strikes as it did last night with a season-high 17 turnovers, tepid shooting and weak defense.

Chris Copeland: As our leading scorer last night with 29 points, we can expect him to get more burn. The defense needs work, but another offensive weapon off the bench is great.

Again, count your blessings Knicks fans that we don’t see the Rockets again this year.

Let’s be brutally honest about Friday’s blowout loss to the Rockets in Houston. The Knicks shamed themselves and reverted back to the worst of their habits from early last year: no ball movement, iso heavy offense, no rebounding and weak interior defense.

The game was reasonable until the last minutes of the second quarter, when Coach Woodson inexpicably went with a frontcourt that included Steve Novak and Melo. The Rockets got to the line at will, with James Harden having more free throw attempts than our entire squad. Omar Asik destroyed Tyson Chandler inside on the offensive rebounding side and scoring at will in the post. At halftime, we had given up 72 points and were looking at a 72-57 deficit.

It got worst in the second half. We got as close as 10 (73-83) when yet again, our leaders left the refs take us out of the game. Melo got a technical for complaining and let a Rockets player waltz right by him on a fast break in the midst of his complaint for any easy score. Chandler wasn’t far behind on the whining, and the Knicks looked completely deflated and went into heavy isolation plays that lead to contested JR Smith jumpers and more fast break/free throw opportunities for the Rockets. Chandler got a flagrant 1 for elbowing Asik and by the end of the third we were down 80-104. Yes, you read that right; the Knicks gave up over 100 points in just three quarters. It was the same story in the fourth with Asik making Chandler is personal whipping boy. The 131 points we gave up is the highest scored by any team this season. Even Toney Douglas was draining shots (now that is unacceptable)

This game can determine how the rest of the Knicks season goes. Either they come together and acknowledge the team’s glaring faults or continue not trusting each other. There’s a few things I’d like to see in today’s game against the Pistons.

1. Stop letting the refs decide the game. It’s not right, but Melo and Tyson are not going to get the benefit of the doubt on any calls. I sincerely believe among refs they’ve gotten a reputation as complainers and the refs deliberately look not to call fouls in their favor. They need to suck it up, not complain outwardly, and get back on defense. Next dead play, mention respectively what’s happening to the refs and keep it moving. This starts with our team captains/leaders Carmelo Anthony and Tyson Chandler

2. PLAY DEFENSE. We lead the league in points allowed and there’s no reason that should have been destroyed by the Rockets. Harden and company driving to the lane at will is unacceptable. Tyson has played badly on the defensive end and has to get it together.

3. Rebounding. Part of this ties into the coaching. We need Camby out there helping, period. Melo does what he can, but playing him at the 4 isn’t always going to work against the bigger teams. You’d think the Grizzlies loss would’ve have hammered that point home. Time to get creative with the lineups as teams are starting to figure us out.