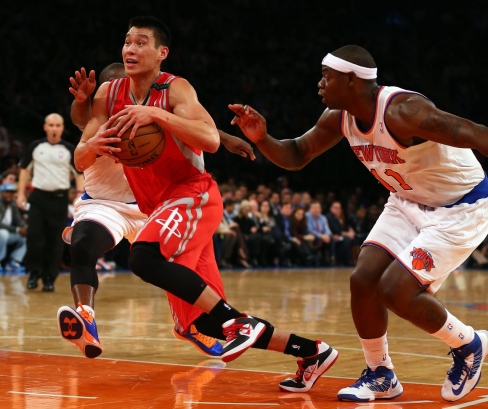 Thank God that Rockets are in the Western Conference. Last night, Houston blew out New York for the second time this season. Don’t be fooled by the 13-point spread the game finally settled on — this one was never close from the third quarter on. We can somewhat rest our head on the fact Melo didn’t play, but there were still a few alarming trends that need to be addressed as the season progresses.

Defense of Our First 10 Games Needs to Return: James Harden (28 points) and Jeremy Lin (22 points) were among the Houston guards that were able to get to the pain at will. While you expect someone like the 39-year-old Jason Kidd to struggle keeping up with the younger guards, some of the defensive lapses by the likes of Raymond Felton and JR Smith were unacceptable. The second quarter pretty much lost us the game as the Knicks were outscored 27-11. No, I forgot about in the third when we cut it to just a five-point game (55-60) before allowing the Rockets to go on a 15-0 run over a 3-minute stretch (I got a little sick just writing that). We can’t put it all on Iman Shumpert’s return, but it’s games like this were you remember his defensive presence with longing. Just one more month…

No Energy: You would think after the Rockets gave us our worst loss of the season last month that we’d be up for this game. Tyson Chandler admitted afterward that the effort was just not there. This wasn’t as embarrassing as the first loss due to the circumstances, but this defeat flies in the face of all the intensity we’ve shown in our previous home games.

Come back, Melo!: Word is Melo is back to regular practices and should be a go for the Brooklyn game tomorrow night. Some people were getting a little beside themselves after we beat Miami without Melo by 20. I heard people claiming that we could win regularly without our star player. This game should bring those few fans back down to earth. For us to win without Melo, we damn near have to play a flawless game of hot shooting, minimal turnovers and good defense. If any of those is missing disaster strikes as it did last night with a season-high 17 turnovers, tepid shooting and weak defense.

Chris Copeland: As our leading scorer last night with 29 points, we can expect him to get more burn. The defense needs work, but another offensive weapon off the bench is great.

Again, count your blessings Knicks fans that we don’t see the Rockets again this year.