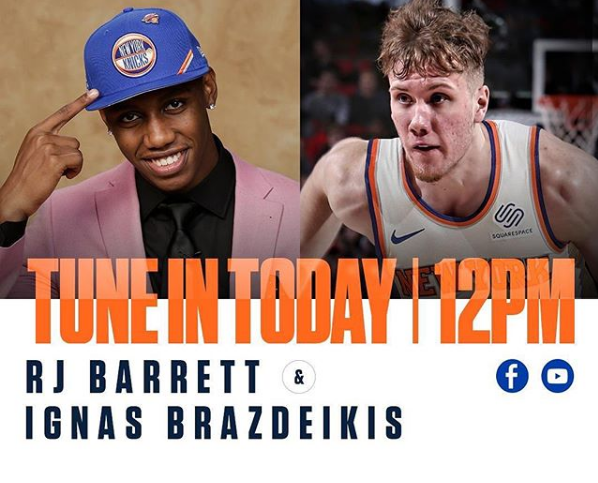 The 2019 Knicks rookies are officially on board! Our two biggest selections in RJ Barrett and Ignas Brazdeikis will kick off today’s introductory NY media press conference at 12 pm ET. The stream opens at 11:30 am ET.

NEW YORK — Coach Hornacek finally found a lineup that works. After a putrid first half where the Knicks managed only 36 points, Hornacek bench Joakim Noah and inserted Kristaps Porzingis at center, helping to ignite 30-12 third quarter that powered the Knicks to a much-needed 93-77 victory at Madison Square Garden. Will this lineup work every night? No, but it showed the unlimited potential of Porzingis when he doesn’t have to chase stretch 4s.

1st HALF SLEEPWALKING: With Dirk Nowitki and Deron Williams both out, you figured this would be an easy night for the Knicks. Instead they labored mightily on both ends. Harrison Barnes ran amuck for 16 first half points as Porzingis struggled to keep up with him off screens. Derrick Rose had to be benched with two fouls in the first. The Knicks trailed 23-15 after the opening quarter, shooting just 4/13 from the field. Melo was completely flat and shot 1-6 from the field.

The second unit, sporting Porzingis as the main offensive option, slowly got the Knicks back in it. KP had a sweet crossover and pullup jumper to get the Knicks within three (28-25). Nonetheless, the ball was sticking too much, and New York could only manage 5 assists and trailed 39-36 at the half.

EUREKA!: Hornacek hit pay dirt by sliding KP to center and inserting Justin Holiday in the starting lineup at power forward. Porzingis’ length and agility allowed him draw three fouls in the third on Andrew Bogut and force him to the bench with four fouls. And Holiday was able to not only keep up with Barnes, but get his own offense working via mid-range jumpers, cutting to the basket, and three pointers (16 points).

Everyone benefited from the floor spread. Melo looked like a new person out there, dropping a blistering 17 points in the third to push the Knicks to a double-digit lead going into the fourth.

OFFENSE AND DEFENSE: New York continued pouring it on the fourth. Melo and KP had their own scoring duel trading three-pointers. Porzingis also got busy in the post abusing smaller defenders and even paid homage to Dirk with a one-legged, turnaround bank shot. Melo and KP both finished with 24 points. Porzingis also added 11 rebounds.

More impressive than the offense was the defense. For the first time this season, the Knicks held an opponent under 80 points. There was no free throw disparity tonight — the Knicks made 16/18 free throws while holding the Mavs to 8/11 from the line.

Yes, we beat up on a depleted Mavs squad. But the Knicks had a continuity we haven’t seen since the Bulls win. They’ll need the same effort when we look for revenge on Wednesday against the Pistons.

I couldn’t write about this game on Saturday because I was too pissed off. If there was ever a game that was an indictment on how bad our defense is, it would be this loss to the Raptors last Saturday.

If you would have told me going in that Carmelo Anthony would have 31 points with Derrick Rose and Kristaps Porzingis adding 21 points apiece, I would have supreme confidence the Knicks would enjoy a blowout win.

Alas, you don’t get easy wins when you statistically have the worst defense in the league. The Knicks couldn’t defend the pick and roll in crunch time, allowing Kyle Lowry several clear drives to the rim to ice the game in the final minutes. Maybe it wouldn’t have gotten to that point if the Knicks could play defense without fouling — the Raptors got 38 free throw attempts to the Knicks’ 16. New York also allowed 20 points in transition.

The verdict is clear nine games into the season. If the Knicks can ever salvage themselves to play adequate defense, they make the playoffs with a decent seeding. If not, we’ll have another extremely disappointing year in the books. 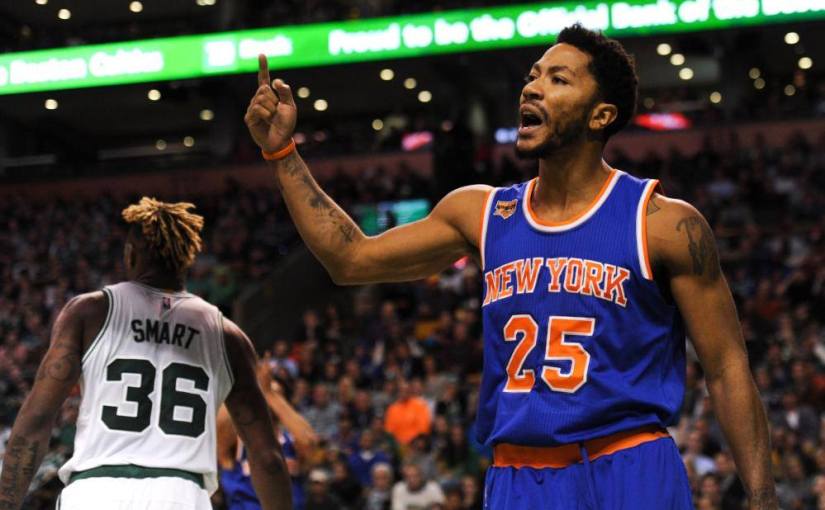 BOSTON — Nobody told the Knicks tonight’s game was 8 on 5. A second quarter ejection, 6 tehcnical fouls and uneven officiating throughout the game helped demoralize the Knicks as they dropped a disappointing game to the Celtics.

WEATHERING THE STORM: The Celtics came in determined to snap their three-game losing streak. Led by Isaiah Thomas (29 points, 23 in the first half), the Celtics were hot from long-range and held a 31-27 lead after the first. Carmelo Anthony kept New York in it with his offense, scoring 12 points in 12 minutes. And during his early second quarter rest, Hernangomez (8 points, 12 rebounds) played well as the first big off the bench. Particularly effective was the Knicks nabbing 14 offensive rebounds in the first half.

THE EJECTION: The game was heating up in the second when Melo was call for dubious loose ball foul. Melo complained vehemently and earned his first tech. He walked away but made sure referee Tony Brothers was within earshot to hear his displeasure. Whatever Melo said was enough to earn his second technical.

The ejection couldn’t have come at a worst time since the Knicks had slashed the deficit to six. Boston promptly went on a 9-0 run and later extended the run to 17-3.

The Knicks were lucky to only be down 61-51 at halftime.

NO MELO, NO CHANCE: Knick fans remember that last year’s team couldn’t muster a win without Melo. Tonight was no different. Porzingis (5-15, 14 points) was frustrated by the physical play of Marcus Smart and never truly got in rhythm. Derrick Rose (3-10, 11 points, 7 turnovers) had a few decent drives in the first half, but ultimately his turnovers and erratic shooting eliminated any comeback hopes.

Compounding the problems was the lopsided foul calling and bad shooting. The Celtics got 43 free throws to Knicks’s 17. New York only managed 39% from the field and 25 turnovers. With those numbers, you can forget winning on the road.

MISSED OPPORTUNITY: The Celtics were without Jae Crowder and Al Horford. With the red-hot Raptors on the schedule tomorrow, the Knicks are in danger of being three games under .500 by Sunday.

WHY DO THE REFS HATE US?: Do we have a bad reputation around the league? The sheer amount of foul calls (and techs) on us is now becoming very alarming. The Knicks aren’t allowed the same physicality as other teams. I’m speculating, but I think we have a reputation as complainers among the officials (hence no calls).

Nonetheless, the Knicks have to learn to channel their anger. Good teams don’t let the officials decide their fate.

JENNINGS JOINS MELO: Brandon Jennings had another poor game (1-7, 6 points) and did his best to get tossed in the fourth. The refs obliged him.

The only silver lining is no one lodged big minutes. The squad should be fresh for tomorrow’s important game in Toronto.

Late pass on this review, but before tonight’s game against Detroit I had to drop some thoughts on our impressive 111-104 home opener win over the Grizzlies last weekend. After being embarrassed by Cleveland on national TV, I was interested to see how our squad would perform. Although it’s early, the mentality I saw on the court leads me to say with confidence this might be our most mentally strong team since the late 90s.

BLEW THE LEAD, BUT NEVER GAVE IT UP: Despite building a near 20-point lead in the first half, the Grizzlies slowly got themselves back in it by making it a plodding, half-court game where Marc Gasol and others feasted at the foul line. Like Knicks teams in recent years, there was a lot of complaining to the refs (particularly Melo, who earned himself a technical). But unlike our former teams, we held firm and put the game away in the fourth. Rose’s playmaking combined with Noah’s interior defense proved to be the difference maker in the fourth.

KP and Melo = 41 POINTS: We waited all last season for these two to put up big numbers simultaneously. We got it with Porzingis dropping 21 points on an efficient 7/11, and Melo going for 20 despite getting mauled in the paint and refs swallowing their whistles. That is the main reason for his 5/15 field goal performance, but Melo made up for it by going 9/12 in free throws.

NOAH IS OUR HEART AND SOUL: This man was fired up from the opening tip and his energy proved contagious. His post presence was a big factor in holding Gasol to 5/15 from the field, and he cooled off a heating up Zack Randolph in the fourth. His stat sheet (6 points, 10 rebounds, 7 assists) shows the versatility Noah brought. His passing was crucial in getting others like Courtney Lee (16 points) off to quick starts.

Barring no serious injuries, it’s hard for me to imagine this team not making the playoffs. 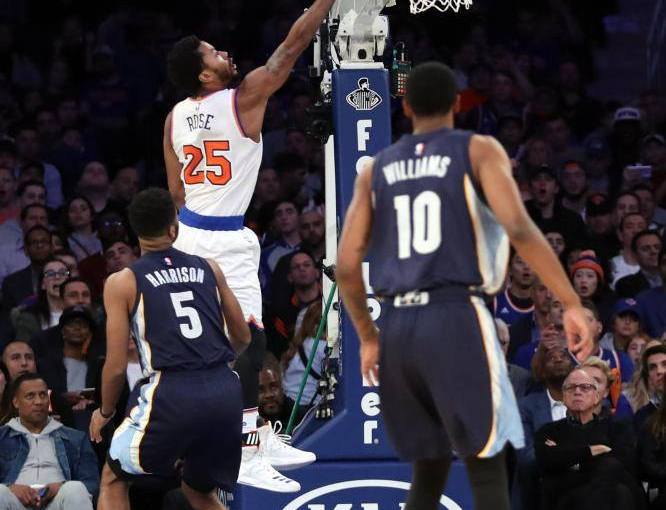 The Knicks celebrated their 70th home season opener with a hard-fought 111-104 victory tonight over the Memphis Grizzlies. Derrick Rose finished with 13 points and provided several  dazzling highlights with his drives to the hoop. Unquestionably, the best play featured Rose crossing up Mike Conley. Remember the talk earlier this year about whether we should have made a big money offer for Conley? Haaaaa Knicks point guard Brandon Jennings has brought some well-needed energy to the Knicks this year. Tonight as New York wrapped its preseason with a win over the Nets, Jennings had a little fun at Brooklyn’s expense as seen with the below post-jumper celebration.

Considering Jennings’ recent shooting woes (27% from the field going into tonight’s game), I’d do a little dance after EVERY basket. Last week on ESPN’s First Take, Stephen A Smith absolutely ripped Carmelo Anthony for an article where the Knicks star stated he’d still be proud if he finished his career with no rings.

Anthony, who’s still competing for Team USA in Rio, was furious with Smith and made his feelings known on Instagram. Sometime over the last two days, the two spoke over the phone and Anthony made it clear his comments were misinterepeted. In addition, Anthony took Smith to task for lashing out in public before speaking with him personally.

You can see Smith’s full apology below. Hey Stephen A, you don’t want to make an enemy out of Melo. 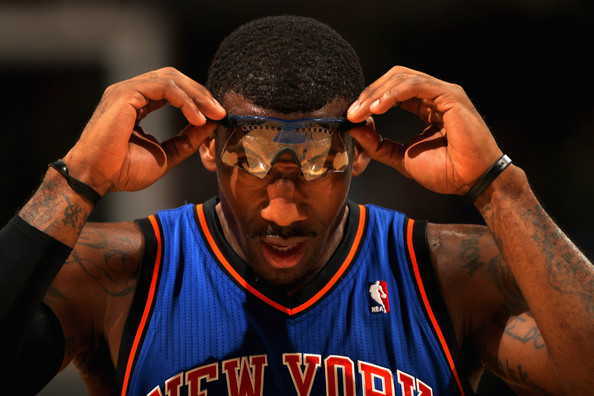 Watch the live stream of Amar’e Stoudemire’s NYC press conference on his NBA retirement signing as a New York Knick and rumored plan to play for Israel as a member of the Hapoel Jerusalem.

We can all finally exhale. The key to the Knicks franchise is back with today’s announcement that Sasha Vujacic has agreed to a one-year deal at the veteran’s minimum!

Okay, stop rolling your eyes and sucking your teeth. The reason Sasha drew so much hate early last season was due to being forced into a role bound for failure. Even at his best, it was a stretch to have him as your starting shooting guard. Because of Arron Afflalo’s hamstring injury, the Knicks had little choice. Paired with Jose Calderon, the duo was horrific on both ends of the floor and were arguably the worst starting backcourt in the league.

Following the All-Star Break, we got a better idea of Vujacic’s usefulness. In spot minutes he proved effective as an annoying, pesky defender and spot-up three-point shooting (45% over the season’s second half). Then rookie Kristaps Porzingis cited him as a valuable mentor. And with the addition of more Euros (Hernangomez, Kuzmiskas), Vujacic might be what the doctor ordered by bridging the cultural gap with the rest of the squad.

Is Sasha a legit SG backup for Courtney Lee? Absolutely not — but for additional bench depth, this is acceptable. And who knows, maybe Sasha will turn into a crowd favorite if he becomes the “human cigar” inserted during blowouts. For now, let’s feast on some of Sasha’s memorable moments from last season.