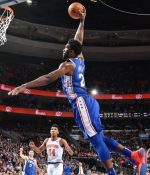 The rookies show out in first road win for the Knicks

The Knicks’s Summer League campaign hit another pothole with a 82-75 loss to the Celtics. While Kevin Knox had his worst shooting game to date, Mitchell Robinson gave Knicks fans a lot to cheer for as he was a terror in the paint (and even defensively on the perimeter. Our loss to the Lakers gave… Read More ›

Summer League: Knox Goes Off for 29, But Knicks Fall to Lakers

There’s still time to apologize if you booed this man on draft night.

The young guards show fight against the defending champs.