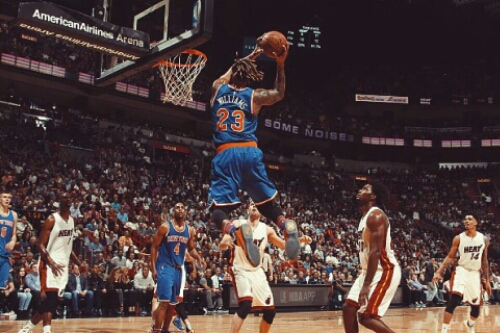 MIAMI — The Knicks made it three in a row last night with an efficient, disciplined performance on both ends against the Heat.

PAINT DOMINANCE: On the offensive end, the Knicks got huge games from the starting frontcourt of Melo (25 points, 5 rebounds, 2 steals), Robin Lopez (19 points, 2 blocks) and Kristaps Porzingis (12 points, 2 blocks). Melo shot 75% from the field, using a balanced attack from inside and mid-range. Porzingis struggled with his shot, but hit double figures in the second half by getting to the line. And Rolo put his full arsenal on display with putbacks, spin moves and his pet baby hook shot.

D-WILL SPARK: Once again, Derrick Williams was the key bench contributor, helping New York maintain their fourth quarter double digit lead. He had 13 points (5/8) to go along with 8 rebounds. The most clutch bucket was a fourth quarter three-pointer with the shot-clock expiring. It pushed the lead back to double digits and seemed to deflate Miami’s confidence.

PORZINGIS STAYS FOCUSED: Chris Bosh had a monster game (28 points) and seemed to relish taking our rookie to school. He got a nice driving dunk at KP’s expense, and Whiteside followed up with his own slam over the Latvian giant. Porzingis didn’t get rattled, and came back from the Bosh dunk for an alley oop on the next possession. Earlier, he had two good blocks on Luol Deng and Dwyane Wade.

He’s not going to block every shot, but I like the fact Porzingis is never afraid to contest, even after getting yammed on like below.

« Knicks Complete Back to Back Sweep of Hawks
[Video] Team Effort: Grant and Porzingis Lead Knicks over Boston 120-114 »