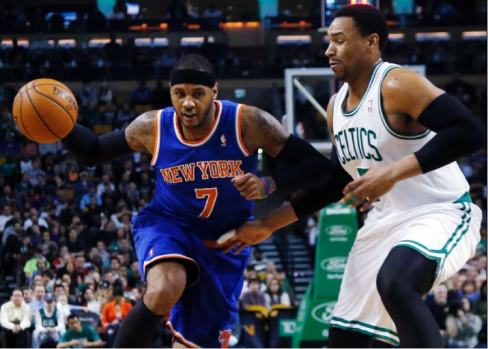 The Knicks extended their winning streak to five games with a wire to wire win over a fiesty but ultimately hapless Boston Celtics team playing without Rajon Rondo. New York was short-handed as well, missing Amar’e Stoudemire and Tyson Chandler, but got a strong double double from an unassuming big man making his first NY start.

ALDRICH DELIVERS: While Melo put up the big points, Cole Aldrich was the game’s most essential player. In 25 minutes, he scored 12 points, grabbed 10 rebounds, and swatted 3 shots. His presence was a +19 on the floor, and he provided much-needed rim protection in the early fourth quarter when the Celtics made a run behind a monster night from Jeff Green (27 points).

Aldrich isn’t the most polished player, but this game is a good indicator that he can provide solid spot minutes. The early second and fourth quarters, when the Knicks are prone to blow leads, would be an ideal place to incorporate Aldrich.

MELO’S EFFECTIVE AND INEFFECTIVE GUNNING: Carmelo Anthony was gunning for most of this game. In the first half, it wasn’t a problem as he scored 19 points (3/4 from downtown). The Knicks as a whole were pretty much hitting everything, shooting 61% from the field for 68 points.

The shot selection became an issue in the third with Anthony going too heavy into iso mode and chucking well contested shots. On the other end, Green was driving to the rim and hitting jumpers, allowing the Celtics to pull within 9 points (84-75) after being down by as much as 24.

Thankfully, Melo and company settled down early in the fourth. On the first play, Melo drove and kicked to Prigioni for an open trey. Later, a shot-clock beating three from Melo made it 95-77, and the Celtics never fully recovered.

HARDAWAY CONTINUES TO SHINE: After a spell of bad games, Hardaway Jr. looks to have regained his confidence. No longer relying on just threes and aggressive drives, the rookie has incorporated a very reliable mid-range jumper. Last night, he got big minutes (38) off the bench and delivered 22 points on 7/11 shooting.

EVERY GAME CRUCIAL: The Knicks moved within 3 games of the eighth and final playoff spot, currently held by Atlanta. The Knicks will need a lot of help to make it, but their play on this streak indicates they’re up for the task.