The Knicks have announced the waiver of guard Chris Smith, prompting older brother JR Smith to subliminally label the move a “betrayal” on social media.

Chris Smith has played just two minutes since being called up to the main roster after injuries to guards Raymond Felton and Pablo Prigioni.

Smith isn’t getting waived empty-handed, though. The Daily News reports that Smith’s contract contained a clause allowing his salary to be guaranteed, meaning Chris will pocket his entire $490, 180 wage for making it to the end of 2013.

That isn’t good for JR, who posted a meme of Robert DeNiro and Sharon Stone from Casino to drive home his displeasure. 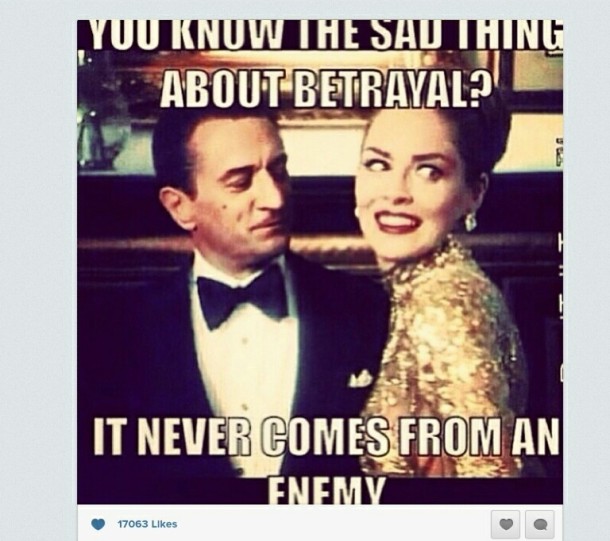 Chris’s signing had long been viewed as a picture perfect example of nepotism and a package deal with big brother JR’s two-year contract that was signed this past off-season. JR is being paid $5.6 million this season.

I won’t get on JR too hard considering this is his brother and we know he’s prone to reacting before thinking things through. And knowing the Knicks, they probably sold him on an obvious lie that Chris would never be considered for the chopping block. However, JR has been in the league long enough to realize that no one man is above the team. With the Knicks in absolute dire straits and being overstuffed with guards, Chris was the clear odd man out to make room for someone like Jeremy Tyler, whom New York is praying can be a youthful spark in terms of rebounding and interior defense.

A moment of silence for the end of the Chris Smith era. And, let’s acknowledge the meme chose to close out his evening.