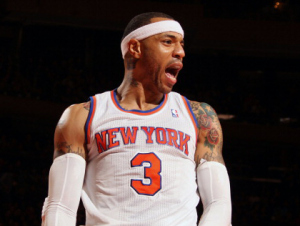 Kenyon Martin has come to terms on a veteran’s minimum deal of $1.4 million that will bring him back to the New York Knicks for the 2013-2014 season.

His production played a pivotal role in the Knicks surging to a late season, 13-game win streak that secured the second best record in the Eastern Conference.

I was never too worried about K-Mart leaving. Nonetheless, it’s satisfying to see another key role wrapped up. Hopefully Coach Woodson learned from how all our veteran bigs fell apart last year and monitors K-Mart’s minutes closely. More reason than ever to make sure we also sign a younger big like Jeremy Tyler.