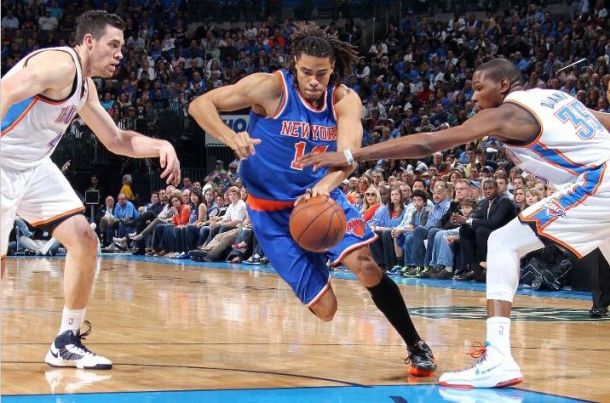 Chris Copeland is gone from the New York Knicks after signing a 2 year, $6 million-guaranteed offer sheet with the rival Indiana Pacers.

The Knicks allowed Copeland to test the free agent market by not offering a contract and focusing on other players such as JR Smith, who was recently signed for 4 years. After using part of their mid-level exception to sign veteran guard Pablo Prigioni for 2 years, the Knicks only had an estimated 1.8 million left and won’t be able to match the Pacers’ offer.

Immediately following the Knicks’ playoff exit to the Pacers, Copeland had expressed a strong desire to remain a Knick. His agent John Spencer says the decision was tough and Copeland remains very grateful for the chance the Knicks took on him.

“Chris is grateful to the Knicks for giving him his first opportunity to play in the NBA,” Spencer said. “Also, the Knicks veterans showed him how to be a pro. They taught him to always be prepared. So it was hard for him to leave. But at the end of the day, the opportunity to play for a championship-caliber team was important for him, and he looks forward to working with another world-class organization.

Copeland averaged 8 points last season for the Knicks and provided a sorely needed offensive spark late in the Pacers series.

I’m usually happy to see former Knicks get well-deserved paydays and wish them well. But as a Knick fans that goes back to our huge 90s rivalries, did it have to be Indiana, Cope? Sheesh. It still irks me that Coach Woodson waited until we were in a 3-1 hole to play him in the Pacers series.

Although it was probably unintentional, there was a little shade in the statement from Cope’s agent, who said the main reason for his client’s departure was the desire to play for a “championship-caliber” team. All in all, I’m sad to see Cope not develop further under us but it’s not like he’s output can’t be replaced via another free-agent signing. This just adds another wrinkle to the various rivalries the Knicks will have for next season.