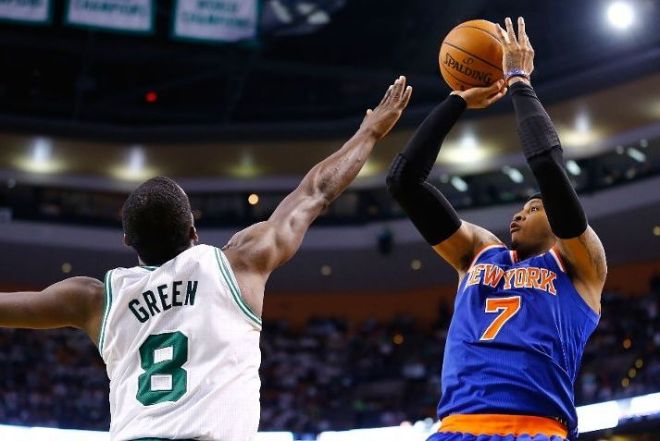 It was a beautiful game last night for Knicks fans as our squad broke the spirit of the Celtics with a commanding 90-76 victory. The narrative coming into the contest was how the Knicks would deal with the emotional energy of a Boston team looking to inspire their city after the tragic Boston Marathon bombing. Knicks fans will recall we had our own emotional lift to start the season when we blew out the Heat in the season opener on the heels of Hurricane Sandy. Unfortunately for Boston, they were facing a team that had them beat in talent and focus.

TAKEN OUT EARLY, BLAME PRIGIONI: The Boston fans wanted something to cheer for, but the Knicks would have none of it. Pablo Prigioni set the tone with two quick treys. Neither side shot well particularly well in the opening quarter (each squad below 40%). However, you never got the feeling this game would be competitive. Raymond Felton was penetrating at will and kicking out for open shots, one of which being a JR Smith triple. The Celtics got open looks but were shrinking away from meeting the challenge by blowing layups. And even with Melo struggling with his shot going 2-7, the Knicks still lead 23-18 going into the second.

OFF TO THE RACES: You know the most impressive thing about the 2nd quarter? For me, it was the fact the Knicks built the lead with Steve Novak in the lineup. Seriously, Novak had been woeful on offense and defense during this series. Last night, he moved well and wasn’t a liability. The Knicks defense as a whole completely stifled the Celtics guards — passing lanes were clogged up and their offense completely imploded. A JR Smith three-pointer brought the lead to double digits (34-23), and there it remained for the rest of the game.

Melo (26 points), dubbed the “ball hog” by the Celtics media pundits, promptly re-entered the game and drained three straight long jumpers and an alley-oop courtesy of Jason Kidd to push the lead to 47-31 at halftime.

Where was Paul Pierce, you ask? The Celtics main scorer was held to just 4 points on 2-10 shooting. In addition, he was forced into 3 turnovers, mostly courtesy of some stifling defense from Iman Shumpert, who ended up with 3 steals and 8 rebounds for the game.

MORE DOMINATION: Outside of a quick 7-0 Celtics run to the start the third, the Knicks were never seriously challenged in the second half. Without Rajon Rondo, the Celtics couldn’t protect the ball (17 turnovers). Melo continued nailing jumpers, and Felton blew past his defenders throughout the game to the tune of 15 points and 10 assists. The Knicks held a 68-52 lead after the third, and the fourth was decided early on when Novak hit his first three of the series to push the lead to 73-54. After that, the game was basically extended garbage time for 7-8 minutes.

THE ONE BLEMISH: JR Smith had a solid game (15 points, 4 rebounds), but committed a costly reckless moment when he responded to a hard swipe from Jason Terry by elbowing him in the face. Terry sold it a bit, but it was enough to get JR tossed early in the fourth. To his credit, Smith walked away immediately, got a stern talking to from Coach Woodson, and headed right to the back. It looks like a suspension isn’t coming, so the Knicks dodged a bullet.

It JR’s defense though , Jason Terry has a face that’s begging for a good elbow.

CHANDLER WORKING HIS WAY BACK: Tyson Chandler’s recent bulging disc injury at has made his contributions this post-season very sporadic. Last night’s game was promising in Chandler showing some good rolls to the basket for dunks like the Tyson we all know. His numbers don’t jump out at you (6 points, 8 rebounds), but watch out when he truly gets back to form.

I have a good feeling Sunday will be the last we see of the Celtics this season.