Another 2nd Half Shutdown: Knicks Rally Behind Defense, Beat Celtics In Game 2 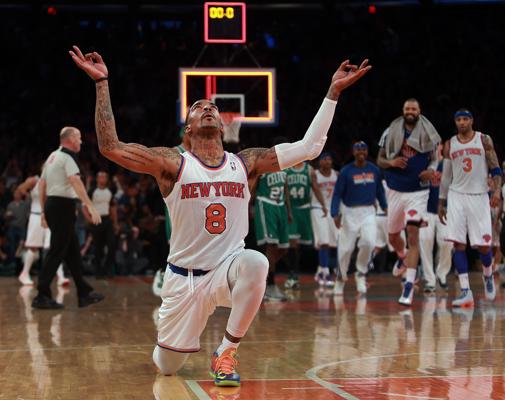 23! No, I’m not talking about the iconic number of one of game’s greatest players. 23 indicates the new record for offensive futility that the Boston Celtics set last night in the second half while under pressure from the Knicks defense. The Celtics could only put up 23 points (11 and 12 in the third and fourth quarters, respectively) when faced with the likes of Kenyon Martin in the lane, resulting in a decisive 87-71 Knicks victory.

We’re still waiting on that complete 48-minute game when it comes to defense, but the Knicks put the clamps down when it mattered and reminded the Celtics this isn’t the team they swept back in 2011.

TRIGGER-HAPPY REFS IN 1ST QUARTER: For whatever reason, the referees decided to call the first quarter like they were afraid a fight was going to break out. BS fouls were being called on both teams, resulting in Iman Shumpert, Kevin Garnett and Tyson Chandler having to take quick seats. Offensively, the Knicks didn’t truly get going until newly crowned Sixth Man of the Year JR Smith came in. Swish went 4-4 for nine points in just 8 minutes with the last two being his patented stepback outside jumper and a breathtaking buzzer-beating three-pointer from 36 feet to give New York a 26-20 lead.

SLEEPWALKING THROUGH THE SECOND: The Knicks had a putrid second quarter all-around. Steve Novak and Chris Copeland continued their invisible play. Jason Terry found his stroke from downtown (3-3) that helped spark a 11-0 Boston run to take a 31-27 lead. At one point, Boston lead by as much as 10 as the Knicks offense degraded into predictable Melo isos. The Knicks couldn’t protect the ball either as the Celtics got 16 points off turnovers and outscored the Knicks 28-16 to hold a 48-42 halftime lead.

The only positive from this quarter was Garnett getting hit with his third foul.

BACK TO REALITY: The Celtics shot 57% over the first half and we know that wasn’t going to continue. Iman Shumpert hit back to back treys that erased the Celtics lead, and from there it was all Knicks. Melo rebounded from a slow first half (3/11 shooting) and lit up Boston for 13 points in the third and 34 points overall. Whenever the Celtics tried to make a run in the fourth, a few quick Melo jumpers kept them from getting closer than nine.

With Melo and Smith guaranteed to get theirs every night, the Knicks always have a need for a third guy to step up on offense. Last night it was Raymond Felton (16 points, 7 rebounds), who pushed the pace and ran the Celtics ragged with his drives into the lane.

The interior defense from Tyson Chandler, who had a huge block on Avery Bradley, and Kenyon Martin, who had four big blocks in the second half, kept the Celtics a jump-shooting team. K-Mart in particular was huge with 11 rebounds (3 offensive) and keeping Garnett (4-9, 12 points) working hard to get post position. His defense was also the main catalyst for Jeff Green not being able to get anything going to the basket.

The Knicks will need to be even better on Friday when they head into Boston for what will no doubt be a highly emotional game. Let’s pay back that 2011 series with a sweep of our own.