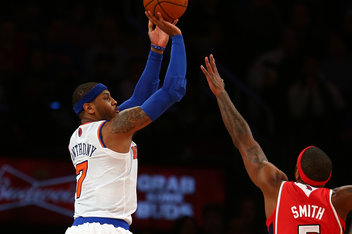 We’ve seen this scenario before. Just last month against the Sacramento Kings, we saw the ball get batted around and end up at the three-point line where we got our hearts broken. Deja vu looked to be in the cards as Josh Smith, who had swished a three earlier in the quarter, got a wide open look at the basket. Instead, the open shot careened off the rim and the Knicks overcame their bad defense to escape with a narrow 106-104 win.

I wouldn’t call this a good win; it was more of a relief when the final buzzer sounded. Onto the reason’s why.

BAD DEFENSE: From the opening tip, the lane stayed wide open and ATL’s Jeff Teague took full advantage of Raymond Felton to the tune of 18 first half points. Felton found his own jumper but couldn’t get any help defense and at times the game resembled a layup drill.

The Hawks would shoot 60% from the field and notch 50 points (!) in the paint. The Knicks continually shot themselves in the foot but having their inept defense eliminate their good offensive runs. At several points throughout the game, the Knicks would go on runs ranging from 16-0 to 7-0 only to have their work erased in a minute by giving up open 3s and layups.

Iman Shumpert was one of the few bright spots on defense in the first half by holding Kyle Krover, coming off 8 three-pointers in his last game against the Celtics, to just 1 point in the first half. For whatever reason, Coach Woodson didn’t play him much at all in the second half.

STOUDEMIRE GREAT ONCE AGAIN: Stat put up some excellent numbers again with 18 points on 6-9 shooting and 8 rebounds (4 offensive). With that type of output, we can live with the occasional blunders (3 turnovers) and bad fouls (4). Woodson knows this team’s future is dependent on the chemistry building between our Big Three and he wisely played them together down the stretch.

MELO ON FIRE: When he went 1-5 in the first quarter, I expected Melo to have a hard time dealing with Josh Smith for the rest of the night. That went out the window in the second quarter when Melo hit three straight from behind the arc (one damn near at half court). I was highly annoyed when he slammed the ball after getting poked in the eye which lead to a tech late in the fourth, but he immediately redeemed himself with the game-winning “And 1” drive on Josh Smith.

PRIGIONI AND SHUMPERT: Prigioni gave us 6 points (all from three) and 4 assists in 10 minutes  which was essential early on in the second quarter. And although he didn’t get to contribute much in the second half, Shumpert provided 2 steals and 8 points in his 19 minutes.

Melo’s hero ball worked tonight, but let’s hope the offense gets more varied and in sync as the chemistry builds with Felton and Shump back on the court.