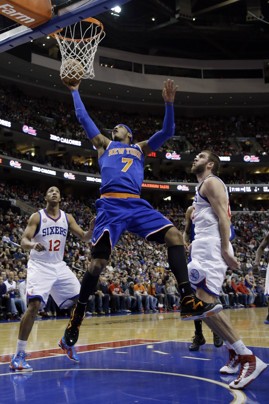 The hell with this game. That was my thoughts just a few minutes into the third quarter when the Sixers extended their lead to 20-plus and it became obvious the Knicks had completely phoned it in. How bad was it? Melo, Shumpert and JR shot a combined 9-42. The team well into the third was shooting 32%. The lane was wide open for any Sixer player that wanted an easy bucket *stares at Tyson Chandler*. Jrue Holiday abused a returning Raymond Felton (and anyone else that tried to guard him, for that matter), to the tune of 35 points.

The sole bright spot for the Knicks was Amar’e Stoudemire got going for his first 20 point game and played decent defense. Other than that, the Knicks are lucky that the Bulls and Nets also dropped games allowing NY to keep their tenuous #2 spot in the East.

All in all, it was an absolutely disgraceful night of basketball. The Knicks better had redemption on the mind today when they face the Hawks on ESPN.