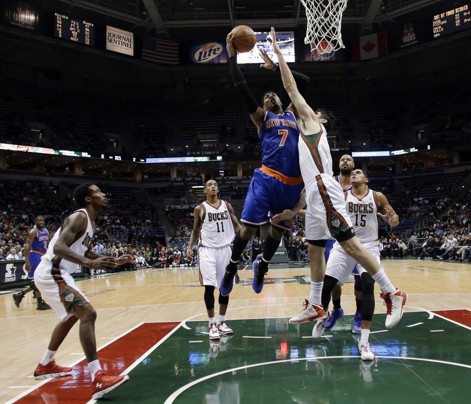 After the bitter defeat last game to the Brooklyn Nets, I was not in the mood to see another tough game with Milwaukee’s explosive backcourt of Brandon Jennings and Monta Ellis going off. Apparently the Knicks weren’t either, as they administered clamp down defense and merciless frontcourt offense to whoop the Bucks 102-88.

Recently, the Bucks have given the Knicks loads of trouble in the form of Brandon Jennings, who seems to relish getting at the Knicks and last season drew a “suck my dick” retort from Melo at the free throw line. Jennings and Ellis started hot, hitting their outside jumpers and blowing past Knick guards to the basket for fouls and layups. Melo had one of his trademark fast starts to keep us in it early, hitting two 3s and drawing fouls inside for 11 points. Jennings and Ellis also contributed 11 points a piece to help give the Bucks a 26-23 lead after one.

Coach Woodson mixed up the lineups to start the second, giving Chris Copeland some burn with the bench unit. The secondary team was anchored by Pablo Prigioni, who contributed two 3-pointers off screens and got a nice steal that lead to a layup. Steve Novak continued his improved shooting as well, draining two 3s to keep the game tight until Melo made it back on the floor. Anthony promptly delivered back to back baskets on a three-pointer and driving layup. The two point guard backcourt of Raymond Felton and Prigioni was able to hold up with help defense (including a nice Novak block on an Ellis cut) as the Buck got sloppy (1o turnovers). The Knicks ran over the Milwaukee in the closing 2-3 minutes to jump out to a 58-48 lead at halfime.

The Knicks remained focused for the start of the third and promptly put the game away. Tyson Chandler, who had eight points at the half, remained aggressive and continue drawing fouls on cuts to the basket in addition to scoring with easy dunks and layups off pick and rolls. In just a few minutes, a Felton steal and layup followed by a Melo jumper had pushed the lead to 68-48. A quick run fueled by a Jennings three and an Ellis drive trimmed the lead to 68-55, but a Melo drive for an “and 1”  layup put a halt to it. The Knicks defense tightened up and the Bucks relied on jump-shooting (which was ice-cold) and fell behind at the end of the third 88-70, being outscored 30-22.

The Bucks bench couldn’t do much better in the fourth; Milwaukee would get no closer than 14 points. The highlight of the quarter was a steal by Steve Novak that lead to a one-man fast break layup, which prompted teases from the bench to Steve for not dunking it. Novak finished with a nice game of 19 points ( 5-7 from downtown). Other big contributors were Prigioni (11 points, 7 assists), Chandler (17 points, 8 rebounds) Felton (12 points, 7 assists) and of course Melo, who dropped 29 points and nabbed 8 rebounds.

And the best stat of all for last night? The Knicks outrebounded the Bucks 38-36 and held their starting frontcourt to 2 points!

New York moves on Friday to face the Wizards.