After last night’s debacle in Orlando, the Knicks will head into Atlanta tonight will two open roster via pending buyouts of doghouse players Metta World Peace and Beno Udrih

World Peace was considered a solid signing in the offseason (2 years, $1.6 million) as was Udrih (1 year, $1.27 million). Instead, both showed erratic play and in Artest’s case, a prolonged knee injury which kept him sidelined for weeks.

Over 29 games, Artest is averaging 13 minutes. This year represents a career-low in points (4.8), rebounding (2.0) and steals (0.8). Udrih started 12 games for the Knicks this year, but became vocal with his complaints about Coach Woodson in January, in addition to requesting a trade. He has played sporadically since then with multiple DNPs. He is averaging 5.6 points and 3.5 assists, down from a career average of 8.9 points and 3.6 assists.

In tweets that have now been deleted, Artest’s brother Daniel blasted the Knicks organization as incompetent.

Ron wanted to be a knick his entire career and his dream became a nightmare. Knicks need an overhaul. Top to bottom

How u an owner but ppl control you? He had to be kissing another of the same sex and it’s on tape. #KnicksTape

I’m not threatening Dolan on twitter tho. Lol. Some fan is locked up for that. Lol. However. I can say he’s the worst owner in sports. 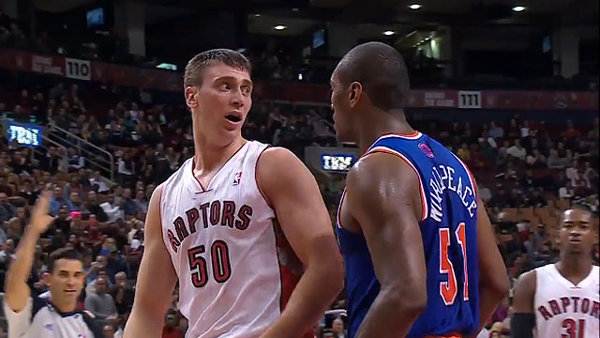 A lineup of third-string Knicks played hard, but not consistently enough in the areas of defense and rebouding to defeat the Raptors, who used an overtime third-pointer from Terrence Ross (27 points) to force a second overtime period and win 123-120.

Our starters did their part in limited minutes. While Carmeolo Anthony didn’t shoot well (4-13, 9 points), he looked to distribute and took care of the glass in grabbing 8 rebounds. Andrea Bargnani’s shot wasn’t there either (4-12), but he was active in drawing fouls (5-7 at the line) and finished with 13 points. Tyson Chandler hit a few jumpers and was energetic around the rim in his 19 minutes, finishing with 15 points and 7 free throw attempts.

With Raymond Felton and Iman Shumpert resting, heavy minutes went to Tim Hardaway Jr. and Beno Udrih. Junior’s (4-16, 15 points) shot was erratic, but he never shied away from taking them and got some good looks. Udrih had a very solid game outside of some head-scratching turnovers (4). He finished with 19 points, including a big three-pointer to help force the second overtime.

As we’ve seen over the last few games, Ike Diogu (10 points, 7 rebounds) and Toure Murry (12 points, 5 rebounds) came to play hard and continued their cases for making the team.

The big highlight of the game was Metta World Peace and it wasn’t his excellent stat line (16 points, 6 rebounds, 3 assists). Tyler Hansbrough tried to dirty up the game as usual and Peace was having none of it. Hansbrough looked like he’d seen a ghost and backed down immediately. In past years, Hansbrough has been one of those guys that’s abused our frontcourt players. Glad to see this season we’ll see none of that when Metta goes into Artest mode.

There was a lot left be desired on the perimeter defense with Ross dropping 27 off the bench and Rudy Gay (19 points) and Demar Derozan (21) also taking advantage of our slow rotations. Rebounding, which will likely again be our weakest area this season, proved to be our downfall as Ross was able to get two looks at a three-pointer that forced the second overtime. However, keep in mind the lineups that were out there and the bigger importance in having all of our main guys healthy to start the year.

Only two pre-season games are left with NY facing the Bucks on Wednesday, and the Bobcats on Friday. 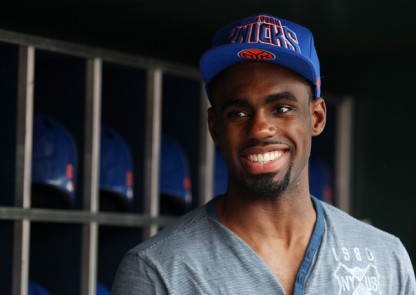 PROVIDENCE, R.I. — Aside from a frustrating fourth quarter collapse, there was a lot to like about the new and improved New York Knicks, who kicked off their preseason with a go-ahead corner jumper from Tim Hardaway Jr. to hold off the Celtics 103-102.

Melo took it easy tonight (7 points on 3-8 shooting), but did show some nify two-man game moves with Andrea Bargnani. The latter’s outside shot wasn’t falling (0-3 from downtown), but he did a decent job of getting to the line and keeping the floor spaced.

The offensive star of the game was Iman Shumpert, who was a scorching 7-7 from the floor (3-3 from behind the arc). There was no holding back — Shump was full speed ahead the entire game. If his shooting remains consistent, Coach Woodson would be hard-pressed to keep him out of the starting lineup.

Metta World Peace was a solid contributor last night as well, chipping in 13 points and 4 rebounds. He was one of five Knicks in double figures, including Raymond Felton (11), Hardaway Jr. (16), Shumpert (18) and Bargnani (12).

With the lead up to 23 points with a little over eight minutes remaining, the Knicks bench was emptied and the Celtics went on a run. They briefly took the lead behind Chris Babb scoring 12 points in the quarter.

Thankfully, Hardaway Jr. was also on fire, dropping 10 points in the final stanza. His jumper in the closing seconds put away Boston for good, and shows the Knicks have another capable offensive weapon to help out Melo. Woodson should be giving him as much play as possible to get his confidence strong for the season.

Next up on Friday are the Toronto Raptors. 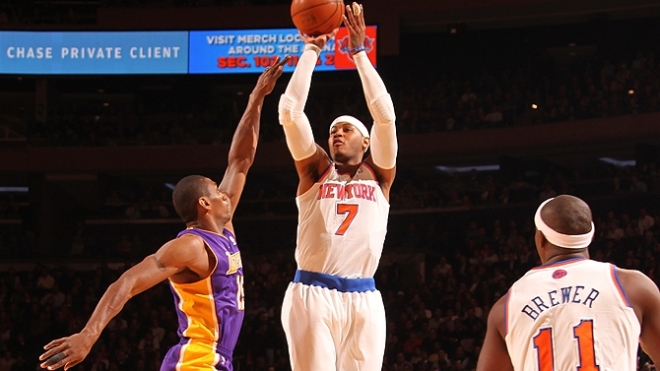 The Madison Square Garden dominance continues! There were many storylines headed into last night’s clash between the New York Knicks and Los Angeles Lakers. Would NY be fired up to face their old coach Mike D’Antoni? Would Kobe Bryant have a classic game to turn his squad around? Would Carmelo Anthony added further credence to his MVP campaign? But in the end, the biggest story is that a better constructed team beat up on a vulnerable, lost squad. With that said, there were several moments that I’m sure had every other Knicks fan on edge despite the final score.

Melo Drops 22 in the 1st Quarter: After Melo hit his third consecutive three-pointer to start the game (two in transition), you just knew it was one of those nights for our star player. He was on a mission to show before a national audience and also to his former coach what a talent he is. Melo got to the rim at will, simply blowing by Metta World Peace for dunks and layups. After getting a fouled for a three-point play off a drive, the “MVP!” chants rained down as the score had ballooned to 41-27, a record quarter this season for the league. Melo’s hot start had the rest of the team fired up as well with Raymond Felton getting easy penetration and Tyson Chandler drawing two fouls on Dwight Howard. Melo would finish the game with 30 points.

Hot Shooting Even with Bad Stretches: At one point in the second, the Knicks were shooting an astounding 74% from the field. Melo got to sit most of the quarter and the scoring slack was picked up by JR Smith and Steve Novak to push the lead to 26 points at one point courtesy of a 27-9 run (58-32). That was the peak though for NY, as our team got sloppy with the isolation plays and allowed LA to creep back to as close to 15  before having to settle for a 68-49 deficit at halftime.

The Knicks had to do without Melo for most of the second half when he sprained his ankle following a hard foul from Dwight Howard (punk). The Lakers hovered around 20 points for most of the quarter but some timely shots by Kobe and World Peace had them just down 93-80 going into the fourth. The offense wasn’t pretty at times in the decisive quarter, but the shooting remained solid and allowed the Knicks to push back the Lakers when they cut it six. For the game, NY shot 53% from the field and 48% (12-25) from downtown.

Chandler’s Help Goes Beyond the Stats: Tyson had 18 points, but when you look at the rebounds (just 4), you’d think he had a completely awful night on the boards. That’s not to say he couldn’t have been much better, but he did seal the game with two offensive tip backs into the backcourt that allowed NY to hold possession in the final minute and effectively ice the game. That made up for the underwhelming time he had at the free throw line, just shooting 8-14 (57%).

The Supporting Cast: Novak had to play heavy minutes (26) with Melo’s injury and made good use of it with 12 points (all from downtown). Although he got exploited on offense by the likes of Devin Ebanks, that was offset by a solid shooting night from JR, who dropped 18 points on 7-14 shooting, including a key late three-pointer. Felton was much more streaky (an ugly 9-26 from the field), but made some key jumper throughout the game. He just needs to work on those floaters. Also check youtube later for a nice crossover he put on Dwight Howard.

The Knicks are now 9-0 at home for the season and still sit atop the Eastern Conference standings at 17-5. It was nice seeing Spike Lee teasingly stare down Charles Barkley for his Knick criticisms. Steve Kerr brought some balance to Barkley’s declarations the Knicks can’t go deep in the playoffs, pointing out how Dallas and Miami won titles without dominant rebounding or low-post scoring. Melo might be sitting tomorrow night when we continue our home stand against the Cavs. That could be a tough game if Melo is out and our offense is cold.