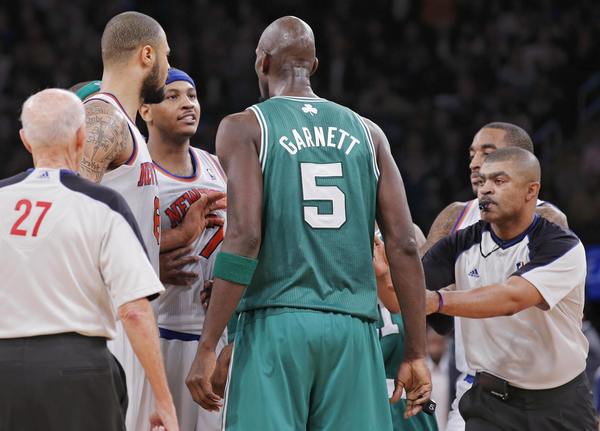 Carmelo Anthony has confirmed a phone call with Kevin Garnett has put an end to their hostilities that began last night at Madison Square Garden.

Anthony and Garnett spent the majority of yesterday’s Celtics win trash-talking in the fourth quarter, drawing a double technical. According to Melo, Garnett said something that “crossed the line” enough to merit him waiting by the locker room and outside the Celtics tour bus after the game for a confrontation.

There’s certain things that you just don’t say to men, another man. I felt he crossed the line. We have an understanding right now. We handled it the way we handled it. Nobody needs to know what was said behind closed doors, so that situation is handled.

Melo refused to go into detail about the matter, but took responsibility for his “losing his cool” during the game and reiterated that his reason for attempting to confront Garnett was simply for a conversation, not a fight.

Absolutely, and that was my whole mindset and motive of going back there and seeing him in the locker room and in the front, to have a one-on one conversation and talk it out like grown men,” Anthony said. “I lost my cool yesterday. I accept that.

The unconfirmed rumor going around is that Garnett said something about Melo’s wife Lala. If that was the case, then I’ll have to do a 180 on my earlier stance as I completely understand and support why Melo went looking for him after the game. A man’s family should always be off-limits unless you’re looking for a fight or at the very least a confrontation.

I can’t wait for the next game between these two squads.