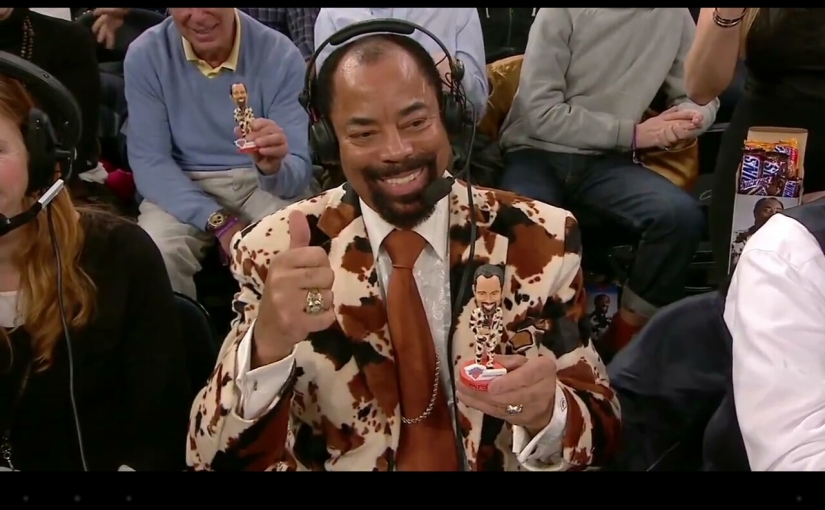 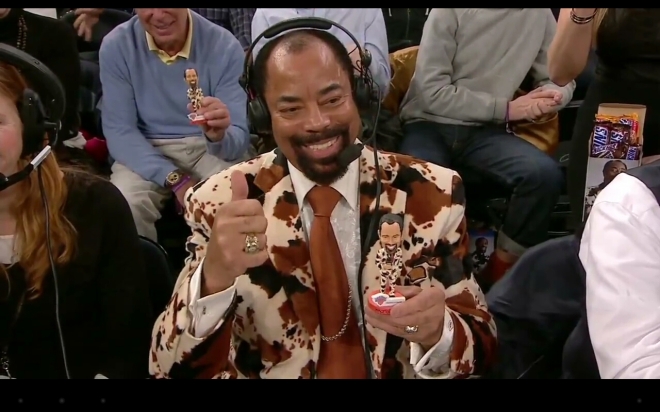 It was fitting that the Knicks celebrate Walt “Clyde” Frazier’s 68th birthday with a win tonight. Hell, we can’t have our Knicks legend wearing that cow-print suit for nothing. You may recall that Bobcats gave the Knicks a tough go of it in December when a JR Smith buzzer-beater was needed to hold them off. JR opted to dominate the entire game this time around, and the team had an easy go of it despite replicating their lazy second half play from the last game against the Grizzlies.

ANOTHER FIRST HALF BEATDOWN: The Knicks came out on fire again riding the playmaking of Iman Shumpert, whose five assists were marked by three-pointers from Carmelo Anthony and Raymond Felton. The team hit five treys in the first quarter and the weak defense of the Bobcats had JR Smith looking like a late 90s Larry Johnson in the post. Charlotte was inept on offense as well, coughing up six turnovers. The New York scoring was varied and lethal, with the team shooting over 70% with under three minutes remaining. Melo had another fast start with 13 points, Shump had 8, Felton contributed 7 and JR 9.

With the Knicks rotating well on defense and keeping the paint locked up, the Bobcats were reduced to long jumpers. Steve Novak and Felton hit more threes to push the lead up to 63-35, and JR’s focus on getting high-percentage shots in the paint enabled the Knicks to equal their season-high in halftime points at 69. On the Bobcats end, the Knicks held them to 47 points to hold a 22-point halftime lead.

SECOND HALF LAZINESS: Seriously, in order for the Knicks to stay focused after getting these big leads, the arena is going to have to start turning off the scoreboards. Just like the Grizzlies game a few nights ago, the Knicks came out flat in the third. Some of the shots just rimmed out, but defensively the big difference was Bobcats guards like Gerald Henderson were able to get to the rim for foul calls. At one point the Knicks missed eight straight shots, but they tightened up in the last few minutes to hold a 88-69 lead going into the fourth.

The Bobcats had a 33 point fourth quarter on the back of hot three-point shooting, Henderson getting a lot of superstar-like calls, and Coach Woodson waiting too long to put his best perimeter defender (Shumpert) back in. The Knicks got into the penalty around the six minute mark and that helped the Bobcats get as close as seven. However, this was the Bobcats and you never felt the lead was in danger of being stolen. Apparently, by their play the Knicks didn’t either, as the offense went into iso mode for Melo over the last few minutes. A JR drive to the hoop pushed the lead to 104-95 with under two minutes left, and a steal by him on the very next possession closed the book on the competitive portion of the game.

JR’s AWESOME RUN CONTINUES: For the sixth straight game, JR Smith shot over 50% from the field. He scored 30-plus points off the bench for the third straight game, becoming the first Knick to do so and the first player since Ricky Pierce did it back in 1990. It’s like the light bulb went off and JR’s finally realized how to maximize his skill set. Tonight his stat line was 37 points on 12/18 shooting (2/2 from downtown) and 11/12 from the free throw line.

We’ll need this same JR and a more efficient Melo on Sunday when we face the Celtics, who’ll be out for blood at the Garden after that drubbing they took in Boston earlier this week.