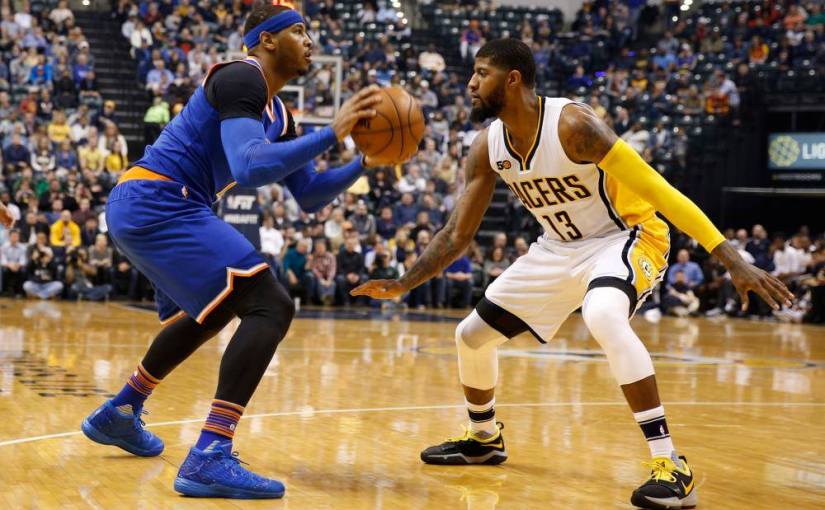 Wait a minute… we won a close game? No heart-breaking game-winners from the opposing team? Some solid defense and clutch buckets? Who are these guys?! The Knicks appeared on their way to a colossal fourth quarter collapse, but Melo’s two clutch shots and a pair of Courtney Lee free throws helped the Knicks escape with their first win in Indiana since 2012.

This was a win that cemented one thing above anything — there needs to be a definite change at center going forward.

HERNANGOMEZ STEPS UP: The Knicks looked on their way to a blowout defeat after falling behind 14 points in the opening quarter. The effort was just bad all-around with 7 turnovers and New York shooting just 39%. Hernangomez coming in for Noah proved vital as he delivered 10 first half points and was a strong presence on the glass. Playing with Kyle O’Quinn, the Knicks were able to put together a 26-12 run to tie the game at 46 in the second.

He kept up his energy and helped the offense tremendously with his screens. He finished with a double double (14 points, 10 boards, 2 blocks). Its now become impossible to argue for Noah keeping his starting job. Hernangomez is bringing a totally different dynamic. Teams can’t sag off him on defense and his nifty post moves make him the offensive threat that Noah simply isn’t. Willy should not be getting any more DNP’s for the rest of the year.

ROSE’S COURT AWARENESS PROBLEM: When you look at Rose’s stat line, it seems solid — 20 points (7/16), 6 assists and a +8 for the game. You’d never guess that he did everything within his power to blow the game in crunch time. Indy went on a 15-2 run to slice a double-digit fourth quarter deficit to 100-97 with less than four minutes remaining. In that span, Rose over-dribbled to a near shot-clock violation while ignoring an open Porzingis, missed a contested layup, and turned the ball over.

Yes, Rose has hit some timely fourth quarter shots this season. But he’s displayed far too much tunnel vision during this losing streak. The aforementioned bad plays went totally against the ball movement that got them the lead.

MELO SAVES THE DAY: We needed a clutch performance and Melo delivered (26 points, 9/17, 6/7 FTs). His offense was consistent the entire game. He dropped 12 points in the first quarter and 17 at the half. He had 21 after three and was the only Knick to score a field goal over the last two minutes. One was a classic bully ball post-up on Paul George, and the second was a quick bassline jumper over Jeff Teague to put New York up 105-103 with 23 seconds remaining.

JENNINGS AND HOLIDAY: Along with Hernangomez, these two were the reasons our bench had such a dynamic performance. Brandon Jennings pushed the pace during the second quarter run that saw the Knicks outscore the Pacers 40-24. Jennings played under control and picked his spots well, balancing between his own offense (9 points) and finding the open man (6 assists). Justin Holiday was a true two-player tonight. He prevented the game-tying three with a block on C.J. Miles, and he went 3/7 from downtown. He’s another young gun that showed he can handle big minutes.

Justin Holiday was a true two-player tonight. He prevented the game-tying three with a block on C.J. Miles, and he went 3/7 from downtown. He’s another young gun that showed he can handle big minutes.

KP STILL NOT HIMSELF: Three games into his comeback and I’m wondering if Kristaps Porzingis returned too soon. The team tried to get him going in the first and he could only manage 2 points on 1-7 shooting. He finished 3/11 and fouled out with 8 points. Melo can’t carry us every night so KP getting back to his early season form is our only hope of prolonged success over the next 2-3 months.

Next up is a road meeting against the Mavericks on Wednesday.

HIGHLIGHTS from the #Knicks exhilarating road win over the Pacers pres. by @budlight! #NYKvsIND pic.twitter.com/TIIXSri3yI