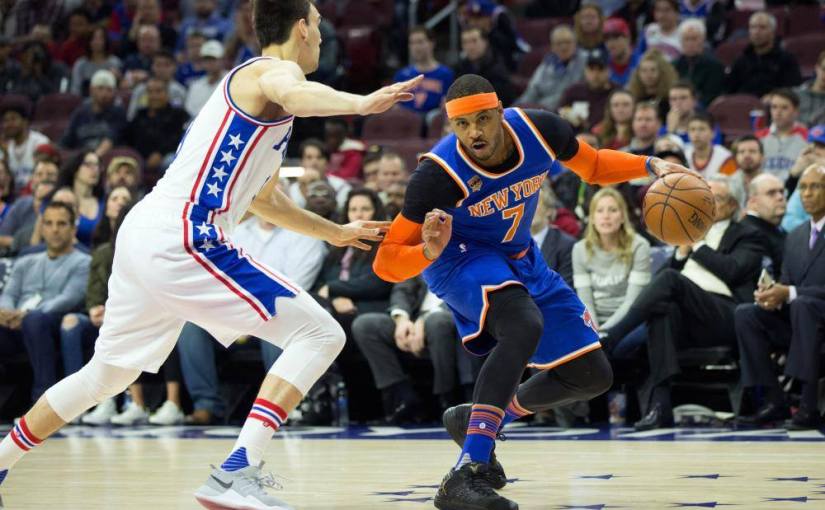 What a joke. A team meeting was supposed to get things in order for the Knicks. They played like it at times, but ultimately they did what the Knicks do in losing focus and blowing a 10 point lead over the last 2:29 of the game to lose 98-97 on a game-winner from TJ McConnell.

Pathetic. Absolutely pathetic. This team has no killer instinct or basketball IQ.

The Knicks had a 17-point lead in the second quarter and promptly gave up a 15-3 run to let Philly close it to five-point deficit at the half. That problem continued in the third with Philly extending their run to 28-7 to take a brief lead.

That’s when Melo took over. After delivering 11 points in the first quarter, he poured in 15 in the third to help put the Knicks up 75-71 to start the fourth. The bench, lead by a solid offensive night from Brandon Jennings (9 points), ignited a 10-0 run to push the lead to 82-71. Later, a Jennings trey kept the lead at 10 (89-79). That’s when the problems started.

CAN’T GET A STOP: It doesn’t matter how good the offense looks. Derrick Rose can drop 25, and Melo can have 28, but no lead is safe with this trash defense. Joel Embiid started to work in the paint and even hit a three to slice the lead to 95-92. Buckets were exchanged with Rose hitting a good mid-range jumper and a driving layup. The killer play came when Rose drove and kicked the ball back out to the perimeter. The ball was passed to a wide-open Porzingis who airballed an open three, leading to the Sixers pushing the ball and McConnell delivering the dagger.

Speaking of Porzingis, it seems the losing and turmoil from the Rose fiasco has zapped his confidence. He was very passive out there (7 points, 3/10) and that airball won’t help his confidence. He did manage 4 blocks with several of them coming on Embiid.

KYLE O’QUINN STEPS UP: This man rebounded (pun intended) from the Pelicans ejection by hitting his first five shots and finishing with 10 points and 15 boards. His effort lifted the team with KP’s struggles and Noah not getting going until the fourth quarter.

This mentally damaged team has to get it together within 24 hours to face the Bulls. The Knicks record this year on back to backs? 0-7.