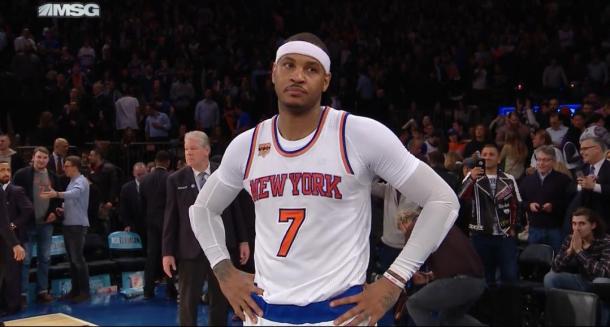 I don’t want to hear it. Don’t cry about Derrick Rose being fouled on that late inbounds play. Don’t whine about the Greek Freak not being called for having his back to basket past 5 seconds. This game should not have come down to these plays if the Knicks had any semblance of defense. That dagger game-winning jumper from Antetokounmpo is exactly what the Knicks deserve for being outscored 32-17 in the fourth and blowing a 16-point lead.

TRY NOT FOULING: For the last 5 minutes of the game, the Bucks nearly scored all their points from the free-throw line. Lance Thomas could not guard Antetokounmpo, and Greg Monroe got his looks as well. On cue, the offense got stagnated with Rose throwing up wild layups and Melo bricking long jumpers.

CHOKED: The Knicks had a fantastic third quarter where they outscored the Bucks 35-21 and took a 14-point lead into the fourth. Then the team inexplicably got passive. It started with the fourth quarter group helmed by Jennings, Holiday, Kuzmiskas, O’Quinn and Lance Thomas. Milwaukee would go on a 14-2 run to put them in position to steal the game.

OFFENSE GOES TO WASTE: This game serves as another clear example that you can’t outscore trash defense. The contributions were immense from Noah (8 points, 16 boards), Melo (30 points, 11 boards, 7 assists), and Kuzmiskas off the bench (15 points). The Knicks also equaled a season-high with 13 three-pointers. Ironically, it wasn’t the perimeter defense that killed us (Bucks were 9/28 from downtown), but Antetokounmpo’s drives in the fourth.

The Knicks see the Bucks again on Friday.