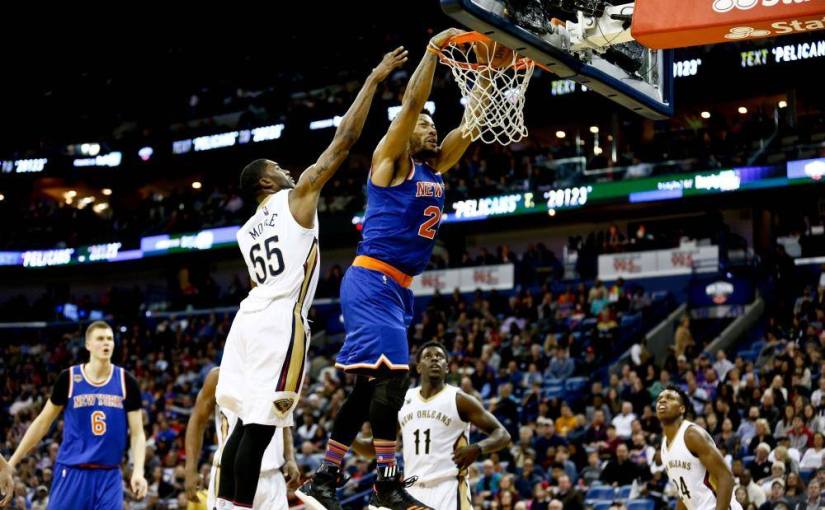 Has this team mentally checked out on Coach Hornacek? Tonight, the Knicks delivered an abysmal effort on both ends of the floor, losing 104-92 to the lowly Pelicans. Outside of a few minutes in the second quarter, the Knicks never seriously competed and continue their tumble in the standings as this loss puts them right back at .500.

ISOLATION BLUES: Normally, Carmelo Anthony is the one that gets killed for holding the ball too long. Tonight, everyone played a part in the stagnated offense. The strategy consisted of either dumping it into Melo or Porzingis for contested shots, Derrick Rose attempting an acrobatic layup in heavy traffic, or another guard like Brandon Jennings hoisting up long threes.

As you can guess, that resulted in New York shooting 38% from the field. The most alarming stat for me was Rose only notching 1 assist all game (which didn’t come until the fourth quarter).

NO DEFENSIVE AWARENESS: The Pelicans were 50% from downtown in the first half (8/16). The second half was all about penetration, as the ghost of Tyreke Evans got into the paint at will for 16 points off the bench. Since they couldn’t get any stops, the Knicks never built any momentum and hovered around 7-14 point deficits in the second half.

Anthony Davis shot 50% from the field and had an easy night picking his spots for 23 points.

Even with our Big Three scoring at least 20 across the board, the loss was still in double digits, once again proving you can’t outscore bad defense.

BRIGHT SPOT:  Derrick Rose showed his hops have returned. He went to the basket for a nice two-handed jam that harkened back to his MVP form.

I think we’ve seen enough of this team to determine expectations headed into 2017. Unless we get a drastic trade that enhances our perimeter defense or Kurt Rambis gets sacked, we should expect this team to hover around the .500. Whether that’s good enough to make the playoffs remains to be seen.