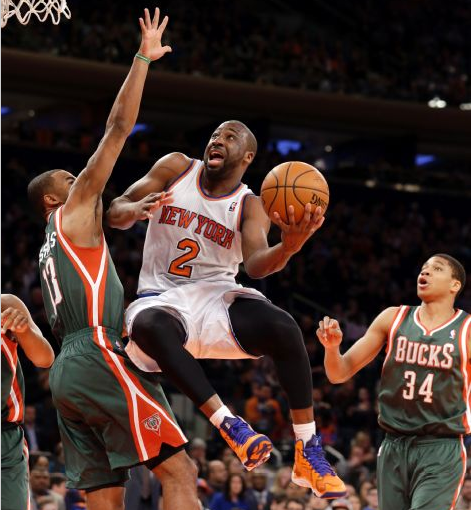 The Knicks will officially welcome Phil Jackson to the team tomorrow night on the heels of a win streak that’s extended to six games via a weekend matinee blowout over the Bucks.

As most Knicks fans will remember, we owed this lowly team for beating us in overtime  last month AND having the gall to tweet out “#Buckstape” on Twitter.

The Buck never a got a true foothold since the perimeter defense was strong and kept guys like Brandon Knight (14 points) and Nate Wolters (15 points) from having career nights. On the other end, Melo lead the way with 23 points (50% shooting), 7 rebounds and 2 blocks. Best of all, Melo only needed 33 minutes of work. Tyson Chandler (2 points, 5 rebounds) and Amar’e Stoudemire (15 points, 6/13, rebounds) had struggles in their return games, but the slack was picked up by Tim Hardaway’s 20 points off the bench, and Jeremy Tyler adding 6 rebounds in 18 minutes.

The Knicks will get their win streak tested on Wednesday when the face the Pacers, a team NY has yet to defeat this season.