I can’t accept all this losing – CARMELO ANTHONY 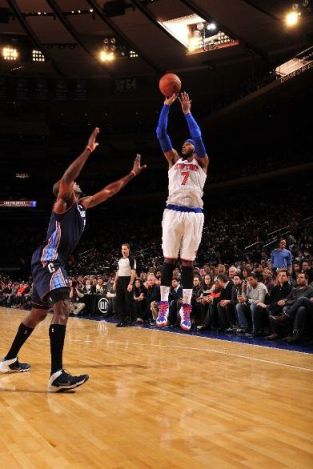 Simply amazing. Less than 24 hours ago, I was witnessed to one of the greatest moments I’ve seen in my years as a Knicks fan with Carmelo Anthony torching the Bobcats for 62 points. Melo didn’t just establish a career-high, but he also broke Bernard King’s record for not only the highest scoring game in Madison Square Garden and franchise history.

Everyone has a different story of when they realized this game was going to be special. Some caught on as early as the first quarter when Melo dropped 20 points. For otherslike myself, it was when he punctuated a 37 point half with a pin-point halfcourt shot.

The other Knicks took Melo’s lead and did what we haven’t seen consistently all season; they picked up the slack in other areas. The defense was strong in with the guards keeping their men in front of them and not relying on switching. The Knicks executed several fast breaks . They didn’t rely on jumpers and attacked the paint (most notably JR Smith). Coach Woodson also played based on performance, letting young Jeremy Tyler (8 points, 5 rebounds, 2 blocks) get more valuable minutes (22) over Tyson Chandler, who was having another so-so game (2 points, 6 rebounds).

Back to Melo. Let’s go behind these numbers. In 39 minutes, he shot 23/35 from the field overall (66%) and 6/10 from downtown (60%). He made all 10 free throws, lead the game with 13 rebounds, and committed zero turnovers. And for those detractors who want to snicker at the fact he had zero assists, that just lets me know you didn’t watch the game, as he had several “hockey assists” passing out OF double teams in the post that lead to open shots.

Apparently, this performance was inspired by a Muhammad Ali speech that was played for the team before the game. Melo’s entire demeanor was different as he didn’t crack a smile until going to the bench after that 62nd point.

Now it’s time to let Melo’s game speak for itself. Watch the highlights and be astounded. We can only hope this becomes the spark that gets the team inspired to finish the year strong. If you want to trade this man or see him leave, you must be insane.