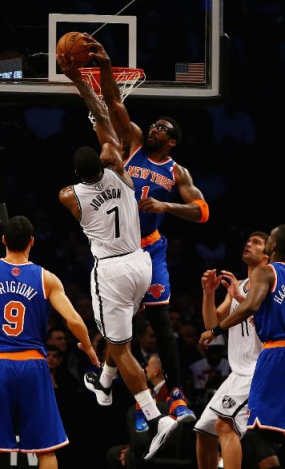 It feels so good to be back in the win column. After a nine-game losing streak, the New York Knicks were due for a good game, and it came at the expense of their equally struggling little brothers in Brooklyn, whom the Knicks lit up for 16 three-pointers (59%) in route to a 30 point thrashing at the Barclays Center. New York put together their first complete game of the season and unquestionably the best performance as a team we’ve seen all year. Is this a taste of things  to come or just a benefit of playing the lowly Nets?

FIRST HALF CHARGE: The Knicks came out on fire, drilling 12 of their first 14 shots and shooting at 78% for much of the quarter. The defense was strong as well, with Andrea Bargnani pestering Brook Lopez with two blocked shots. Garnett got a nice dunk only to be one-upped on the next play by Bargs driving past him and slamming home a one-handed stuff. Melo played the background (no shot attempts over the first 5 minutes) while others like Raymond Felton (3/3, 8 points) kept the floor spaced with their offense.

The Knicks lead 30-23 after one, and continued their momentum with the second unit (Prigioni, Hardaway Jr., Stoudemire, JR and K-Mart) holding serve with the guards covering much of the scoring slack despite Stat struggling at times with KG offense. Melo and company returned at the 7:31 mark and quickly pushed the lead up to 10 (42-32) courtesy of a sweet Melo pass to an open Shumpert for a trey. A 22-6 edge in rebounding allowed Brooklyn to the trim the deficit to 50-43 at halftime. However, the Knicks were  shooting 58% with the balanced scoring, giving you the feeling the Nets were just delaying an inevitable blowout.

3RD QUARTER PILLAGING FROM MELO AND SHUMP: The 18-5 run that closed the book on this game was ignited by the hot three-point shooting of Iman Shumpert. After weeks of trade talk and his standing with Coach Woodson, it was great to see the assertive, sharp-shooting, and highly confident Shump we’d d been expecting all season. His five three-pointers were a career-high, along with his 17 points being a season-high. Outside of a verbal squabble with Andrey Blantche that earned them double technicals, and being a litte too aggressive early with his defense, Shump was pretty much flawless last night.

Melo (19 points on 8/12 shooting, 10 rebounds, 6 assists) had the prototype game of how he should play when the team’s outside shots are falling. He made sure everyone got involved early on (namely Bargnani), made quick decisions out of double teams, and abused Alan Anderson on the block and on the boards. By not having to carry the offensive load in the first half, Melo had more than enough energy to put the finishing touches on the end of an awesome third quarter with several jumpers and passes to a rolling Stoudemire for quick scores. By the time the smoke cleared, the Nets found themselves in a 84-59 hole with the entire fourth serving as extended garbage time.

NO COUNTRY FOR OLD MAN TRASH TALK: Andrea Bargnani had what I’d like to call a “good ejection” in the fourth after getting a second technical for getting into it with Kevin Garnett. Earlier, both had received double technicals for getting tangled up after a rebound. Bargnani didn’t back down and got ejected for talking trash to KG after draining a three in his face. It’s much easier to deal with KG’s mouth when your mopping the floor with him and his team.

MOVE THAT BALL: New York had 24 assists to Brookly’s 11. It should come as no surprise that the Knicks shot 57% for the game while the Nets could only muster 39% on repeated isolation and broken plays.

The Knicks will be back at it tonight to prove they’re on the road to turning it around as they face the Orlando Magic. The Knicks have lost seven-straight at home, so that’s another losing streak the squad should be motivated to snap.