Snatching Defeat From the Jaws of Victory: Pelicans 103, Knicks 99 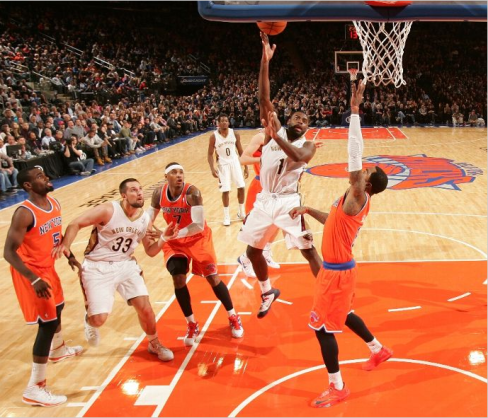 When you’re playing this bad, you find ways to lose, as the Knicks did last night at the Garden in dropping their seventh straight at home and ninth overall. The last time New York lost nine straight was back when Larry Brown was coaching the team. Ironically, I don’t think any of those sorry Knicks teams were ever as bad defensively as what we’ve seen on this losing streak. 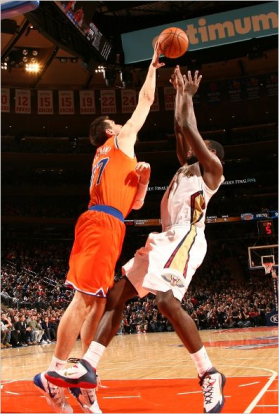 BEST FIRST QUARTER IN AGES: The Knicks came out with strong defense from a surprising place. Andrea Bargnani, of all people, was prowling the paint and swatting shots to the tune of three blocks. His jumper was working which helped space the floor and get others involved, leading to Melo only attempting his first shot six minutes in. Felton was nailing shots and dropped a sweet alley-oop to Melo. The Knicks were able to hold the Pelicans to 24% shooting for a 20-16 lead, and got another break with New Orleans’ best player, Anthony Davis, leaving the game with a hand fracture.

EARLY SIGNS OF A COLLAPSE: Although the Knicks held a 49-44 lead at halftime, the second quarter displayed signs of the horror to come in the second half. Tyreke Evans came off the bench and pretty much waltzed into the paint at will for layups, scoring 10 points in just 14 minutes. The perimeter defense was worse, as another bench player in Ryan Anderson got repeated (and I do mean repeated — 7/11 from behind the arc) open three-point shots to keep the game close.

The offense was stalled as the Knicks overall were looking to just shoot jumpers and not attack the rim with Davis absent. The Knicks didn’t get their first free throws until midway in the second and it was Bargnani’s foul drawing that allowed NY to hold their lead.

ANOTHER 30-PLUS QUARTER: We know by now that the mark of an extremely poor defensive effort is when the Knicks give up 30 or more in a quarter. They did so in the third behind putrid interior defense. Kenyon Martin was the culprit several times here as he failed to rotate. Bargnani’s main weakness is help defense, so despite his scoring he allowed multiple uncontested layups as well. The frustration hit peak levels when Melo foolishly switched off Anderson on the perimeter. Bargnani didn’t come out to cover, leading to Shumpert dashing recklessly to prevent an open three-pointer (which happened anyway). Shump crashed into a Pelican big setting a pick, leading to a foul and four-point play opportunity.

Shump was livid after Melo criticized him for the play. He tried to plead his case in the huddle as Melo (and Coach Woodson) tuned him out.

Frankly, the play shows the lack of teamwork and awareness the Knicks play with. All parties could have done better. Melo should have never left Anderson, Bargnani could have flashed out to prevent the three, and Shumpert shouldn’t have barreled through the pick for a needless foul.

4TH QUARTER STRUGGLE: The Knicks started the final 12 minutes down 2 points (76-74), but were able to at one point gain a six-point lead off the hot three-point shooting of Tim Hardaway Jr., who drained back to back treys to put NY up 88-82.

At that point, the game should have been over with the Knicks maintaining decent defense and pulling away. But if you can’t play smart defense, it doesn’t matter how hard you play — the lead will soon be erased. In a matter of about 30 seconds, a Ryan Anderson three and a three-point play by Evans on a fast break erased the Knicks’ cushion.

The final six minutes were disastrous on both ends. The Knicks committed six turnovers and missed 12 of their final 13 shots. While the Pelican guards were feasting in the paint and on the perimeter, Shumpert remained benched in favor of JR Smith, who couldn’t get a stop if his life depended on it. JR himself admitted as much after the game:

They were pretty much scoring at will, especially my guy. I don’t know what the hell I was doing on defense.

Shumpert was so upset (and deservedly so) that he declined to talk to the media after the game.

THJ’S CAREER NIGHT: Although his defense was suspect along with everyone else, Tim Hardaway Jr. was the shooting spark that nearly won this game for NY. He had a career-best 21 points off the bench on 6-10 shooting (5-8 from downtown) in 25 minutes. We can only hope Woody continues to play the kid more and experiment with a Shump-Hardaway lineup until JR gets his mojo back.

MORE PABLO: Ray Felton had a strong first half (10 pts. on 4/5 shooting, 5 assists) but fell of a cliff in the final 24 mintues (2 pts, 0/5 shooting). He had a bad turnover down the stretch and possibly suffered a hip injury. Prigioni getting 10 minutes last night in lieu of Felton’s struggling made no sense.

FROM THE BOTTOM TO THE TOP: Let’s be clear — the Knicks are in shambles right now. There’s no leadership, no accountability and no identity. And yet, the team is still just three games out of first place on the Atlantic Division. The Knicks have a “favorable” schedule of equally sub .500 teams over the next four games (Nets, Magic, Celtics and Cavs). If the team can manage a 3-1 or 2-2 stand, it’s something solid to build as Tyson Chandler returns in the next 1-2 weeks (with hopefully Jeremy Tyler by the end of the month).

In the meantime, try not to slit your wrists, fellow Knicks fans.