The Grind: Knicks Ride 2nd Half Defense, Take Game One Over Celtics 85-78 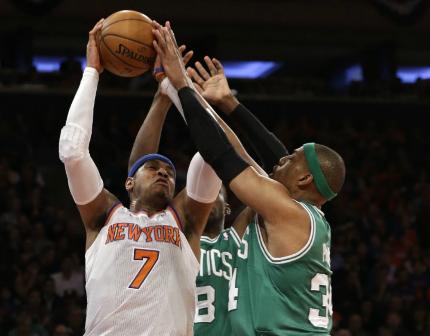 The Knicks can’t win without hitting a ton of threes. No one on that squad plays defense outside of Kenyon Martin and Tyson Chandler. They can’t handle a physical defense. There has been a lot of bullshit spewed against the Knicks by network talking heads over the last few months. I don’t expect much of their flawed narrative to change due to one game, but the Knicks sure looked like a team ready for the tough playoff grind as they gutted out an old-school, half-court battle with the Boston Celtics. This was far from a polished performance, and that’s exactly why this win is promising as the Knicks will surely improve as the series progresses.

THE HELL WITH EFFICIENCY. GIVE ME BUCKETS WHEN IT COUNTS!: It’s no secret that success for the Knicks starts and ends with the play of Carmelo Anthony. Early on Melo was on fire in hitting his first four shots (two from downtown). He then went extremely cold from the field. People made a lot about this, claiming that Melo was holding the ball too long. That’s true on some possessions, but many times Melo was given the ball in the possession’s final seconds when our guards failed to get any penetration.

Melo stayed with it and got hot when it counted in the fourth quarter. With the game on the line, he hit back to back jumpers to push the Knicks lead to 76-72. A deflection caused a Boston turnover and Melo promptly went on a one-man fastbreak to hit a layup and make the lead 81-76. The final dagger would come with little over a minute when Melo hit a long jumper over Jeff Green. And for further emphasis, Melo countered a hard trap by finding K-Mart under the basket to make it 85-78.

I’m not a stat nerd and could care less if Melo shoots 35% or 60% as long as we win. These games will be decided in the fourth and from what we saw yesterday, Melo is ready to meet the challenge.

25 AND 8: These are two numbers sum up our second half defense. First off, the Knicks should have been embarrassed to give up 53 first half points to that Boston offense (particularly letting Jeff Green go off for 20 points). They took the challenge in the second half by holding Green to just six points in the final 24 minutes. The Celtics only scored 25 points in the entire second half and 8 points in the fourth quarter!

Two guys were essential in this defensive stand: Jason Kidd and Kenyon Martin. Kidd was all over the passing lanes and totally killed the ball movement in the Celtics offense, being the catalyst for six fourth quarter Boston turnovers (20 for the game). And K-Mart played superb D on Garnett, swallowed up numerous offensive boards, and protected the pain like a madman. The below block sums up what we want out of our defense on every possession.

JR’S DUNK: JR’s shot wasn’t going down yesterday, but he remained aggressive. Like Melo, he had key buckets in the fourth, including a three-point play layup over Kevin Garnett. His biggest play came in the first half courtesy of this massive dunk below.

NO FAVORITES: I was highly worried about Coach Woodson’s sanity when I heard he was considering starting James White. Thank God that didn’t happen. What I liked most about Woody’s decisions is that he played no favorites with the lineup. Tyson Chandler wasn’t as strong defensively as K-Mart, so Woody went with the latter to close out the fourth. Chris Copeland has been a prolific scorer to close out the season, but he had jitters and also couldn’t contain Green. Woody quickly benched him as well. They’ll get more chances to contribute as adjustments are made, but I’m extremely happy to see Woody’s stubborn tendencies eradicated.

The Knicks get one more day of rest tomorrow which bodes well for a potential Tuesday return of Pablo Prigioni.