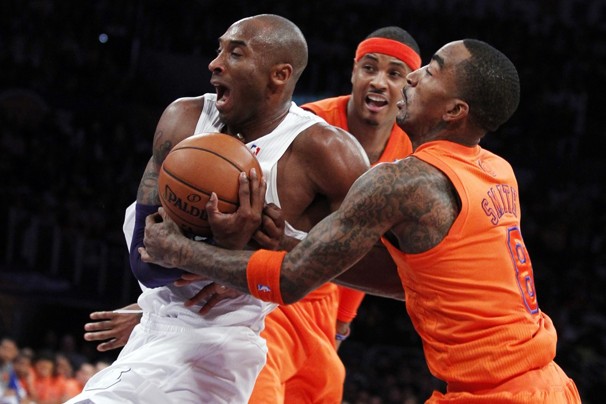 To hell with Christmas! Well, maybe I shouldn’t go that far, but watching the Knicks slowly become unglued in the fourth quarter yesterday afternoon to drop a very winnable game to the Los Angeles left a sour taste in my mouth. It was a game of runs and standout performances, most notably Metta World Peace’s 16 point second quarter and Carmelo Anthony’s 17 point third, but in the end the Lakers got the stops they needed and punctuated the game with a Pau Gasol waltz through the lane for a dunk with just six seconds left on the shot clock.

It’s not the end of the world, but yesterday’s game was one that could’ve made a statement instead of highlighting our squad’s glaring flaws.

WEAK OFFENSE: Outside of Melo’s 34 points and JR Smith chipping in 25, everyone scored in single digits and shot horribly. Raymond Felton was the worst culprit in missing several floaters in the game and having one horrible sequence where multiple layups were missed under the rim. He shot 5-19 and the one positive of his performance was the 0 turnovers. But as the point guard, the flow of the offense falls on him and it was terrible in the decisive fourth.

HOWARD BESTS TYSON: All of last year, Tyson Chandler pretty much neutralized Dwight Howard one on one. Yesterday, it was Dwight who got the better of our center, especially on the defensive end. Howard repeatedly deflected our money Felton-Chandler lobs and altered nearly every shot at the rim. Chandler fumbled multiple passes and finished with a stat line of 6 points and nine rebounds before fouling out.

NOT FINISHING: Our free throw shooting was infuriating, going 9-16 for an unacceptable 56%. Aside from that, we couldn’t finish at the rim for nothing. Yes, Dwight Howard was down low, but much of it was our players failing to go up strong.

CAMBY MESSED UP, BUT GIVE HIM TIME: Marcus Camby returned for the first time in a month and nabbed 4 rebounds in 8 minutes. We lost the rebounding battle by just two (40-42) and that’s promising. Camby did mess up badly with one bad turnover and a missed defensive switch assignment that allowed Gasol to finish off the game with a dunk. However, if we are to compete strongly for the rest of the year, his backup minutes behind Chandler for defense and rebounding will be essential.

ARE WE REALLY PANICKING AT 20-8?: Everyone take a deep breath. Yes, this squad isn’t playing their best basketball. No, the defense isn’t as strong as it was at the beginning of the season. Time for everyone to be realistic — these guys are not robots and will have off/down periods. Considering Melo and Felton are banged up, Wallace is out, Iman and Amar’e are still waiting in the wings and we’re barely out of first place with a record of 20-8, are we ready to really start signaling the end of the world? Even with this uneven stretch of basketball, we are 3-3 over our last six and 6-4 over our last 10 and just a half game out of first place. Don’t listen to the talking heads. Outside of season-ending injury to our core, we’ll get it together. In the words of our fearless leader Carmelo Anthony:

We missed a lot of easy shots, a lot of little chippers around the basket, shots that we normally make,” Anthony said. “There were some plays that we thought should have went our way down the stretch, but for the most part, we fought. I’ll take this effort any night. If we continue to play with this effort, we’ll win a lot of games.

Getting it together starts tonight when we face the Phoenix Suns. No reason not to get that one.