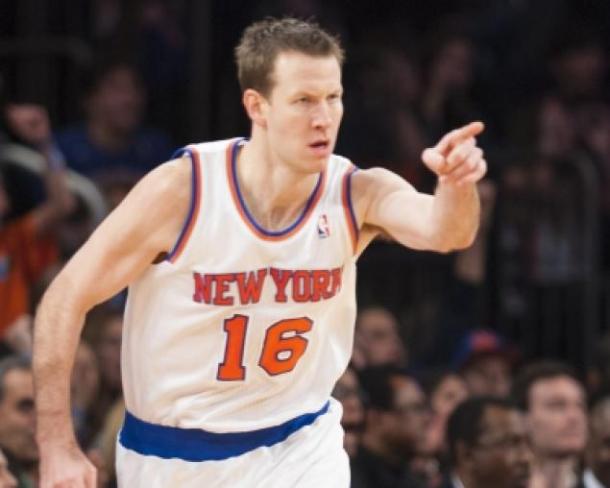 After getting ran off the floor in Houston and letting the refs and three-point shooting sink them in Dallas over their last two games, the Knicks needed to get refocused. New York did just that against the lowly Detroit Pistons yesterday, fueled by Carmelo Anthony’s 29 points and good contributions from Raymond Felton, JR Smith, Tyson Chandler and Steve Novak to notch another blowout and maintain a perfect 5-0 record at Madison Square Garden.

Melo had one of his trademark red-hot starts to kick off the first and never really cooled down for the rest of the contest. He started 6-6 and had 15 points in the quarter, while Tyson Chandler was aggressive on pick and rolls and getting to the line. Pablo Prigioni had a nice steal in the waning seconds of the quarter to push the lead to 32-22 on 61% shooting from the field and one turnover.

New York was very cold to start the second and the Pistons found new life behind guard penetration from Will Bynum. The lead was cut to 32-29, but Knicks were able to hold on with Marcus Camby keeping the Pistons off the offensive glass. Melo came back in and hit a tough turnaround jumper and dished a nice behind the back pass to JR Smith for a corner three. JR Smith had a great rebounding game (10), including an offensive one that lead to a Steve Novak three that pushed the lead to 50-38. Felton had back to back buckets off a jumper and back door cut pass from Jason Kidd, who then drained his own three-pointer to push the lead to 57-42 at halftime.

The Knicks had a mental relapse to start the third with three straight turnovers, two on fumbled passes from Tyson Chandler. This allowed the Pistons to reel off eight straight points. Melo got a tough call for “fouling” a three-point attempt from Kyle Singler, but showed the restraint that had been lacking the last two games. Coach Woodson even made it a point to pull Raymond Felton away from a referee. A Melo three-pointer pushed the lead back to 75-60, but the Pistons guard penetration kept them within striking distance. However, two threes from Steve Novak in the final minutes gave NY a nice 86-72 cushion going into the last quarter.

Novak stayed hot from downtown and immediately pushed the lead to 93-78 to start the fourth. Outside of a miracle three-pointer from Brandon Knight (21 points) with the shot clock winding down and Chandler in his face, the quarter was all Knicks. Novak hit another three and for the first time this season put on the belt as the lead ballooned to 98-81. It wasn’t a serious contest after the first few minutes of the fourth, but that didn’t stop Rasheed Wallace and James White from hitting a few more threes to put the exclamation point on the game.

This was all-around great game for the Knicks to end this woeful two-game losing streak. The contributions outside of Melo were fantastic from Felton (14 pts, 10 assts), JR Smith (15 pts, 10 rebs, assts), Wallace (15 pts), Chandler (13 pts, 7 rebs) and Novak (18 pts). Novak has been off for most of this year so to see him go 5-7 from three bodes well for our premier shooter.

Tonight is the biggest game of the season thus far when we met our crosstown “rivals” the Brooklyn Nets. Don’t miss it on TNT.