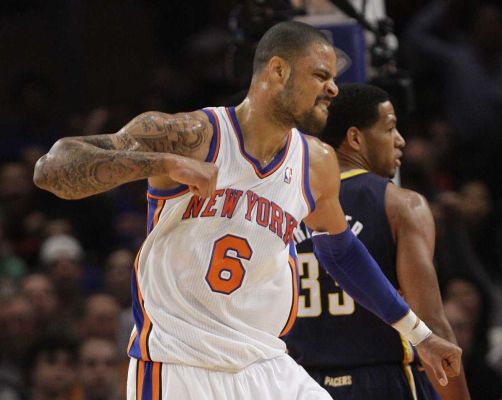 Another game, another double-digit win for the Knicks. The offense wasn’t exactly on fire, but  the Knicks defense, forcing 19 turnovers and nabbing 9 steals, held the Pacers to 76 points (the lowest the Knicks have held a team this season) for a 12 point victory.

Melo got back to his fast starting ways, dropping 12 points in the first quarter to give the Knicks a 21-18 lead. The defense held serve in the second, holding the Pacers to just 12 points to push the lead to 41-30 at halftime.

Fouls were still a problem for Melo this game; he had to sit early in the third when he picked up two quick fouls in the lane trying to guard Tyler Hansbrough. Novak came in and helped the offense with a few 3s, but also hurt the defensive closeouts, as Paul George got hot from 3-point range and sinked three in the quarter. The Pacers hovered around the 9-point deficit mark but missed 4 free throws down the stretch and Rasheed Wallace sunk a 3 to give the Knicks a 68-56 edge despite a 26-point quarter from Indiana.

New York put the Pacers in their place early in the fourth behind several JR Smith jumpers and Melo forcing fouls inside despite getting blocked several times. Marcus Camby got some valuable minutes and made sure Roy Hibbert stayed locked up (Camby got a massive block inside on Roy). JR got his own block on David West which lead to a 3-pointer that pushed the lead to 79-60. Later, a Novak 3 gave NY a 86-66 advantage, leading to the starters hitting the bench and the Pacers challenging no further in garbage time.

The shooting was weak from both squads: NY shot 36% and Indiana 39%. The defense was the difference-maker and the fact Indiana has been lost offensively without leading scorer Danny Granger. Melo lead all scorers with 26 points, followed on the Knicks end by JR Smith (13), and Raymond (11) as the only other guys to score in double digits. Paul George lead Indiana with 20.

On a very happy note, this was the first game we were NOT outrebounded; we won the boards battle (barely) 48-47. Hey, we gotta start somewhere. It was a nice bounce-back win from the battering we took from the Grizzlies and we have a pretty favorable run for the rest of the week (New Orleans, Dallas, Houston and Detroit) before the big showdown next Monday at MSG 2 (The Barclays Center) to face the Brooklyn Nets.

Next up is a road game tomorrow against the Hornets.