In Ball Movement We Trust: Knicks Trounce the Heat 104-84 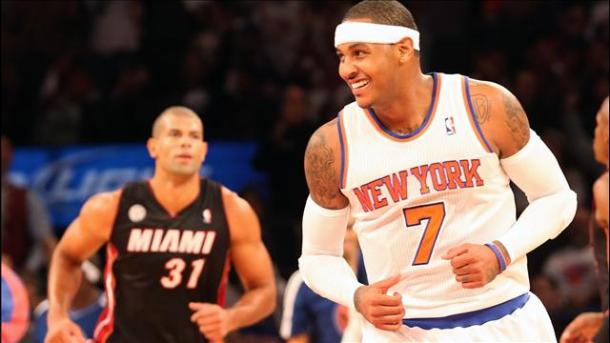 Yesterday morning, I prayed to the basketball gods that my beloved Knicks would kick off the 2012-2013 season with a nice win. But even in my wildest dreams, I couldn’t imagine my team absolutely drubbing the defending champion Miami Heat in a 20-point blowout (104-84).

For the past few months, Knicks fans have had to endure ridicule for picking up older players and being called “the second best team in New York.” Last night’s performance went a long way to shutting those critics up: Jason Kidd was integral in setting the ball movement early on along with Kurt Thomas supplying solid interior defense. Raymond Felton was phenomenal with his dribble penetration that freed up Melo for several 3 pointers in route to a 16 point first quarter and a 33-17 lead.

The ball movement continued in the second quarter to the tune of 11 assists. The defense produced 12 Heat turnovers and prevented that team’s signature fast break dominance (only 10 fast break points).

Last year our squad would routinely come out flat in third quarters and quickly blow whatever lead we had. Not so last night — although we got off to a sloppy start, our defense kept the Heat turning the ball over while Novak sank a few timely 3s to halt a late 8-0 run.

The Heat made their final run through the first few minutes of the fourth, spurred on by a few ticky-tack fouls. However, Felton and Novak both sank 3s, the latter being a beautiful escape dribble to the left that faked out Ray Allen. The game was iced by the final five minutes, and Wade and LeBron made their exists while Rasheed Wallace chants rained down at MSG. The grizzled vet blew the roof off with a final 3 pointer to make it 19 from downtown (!!!) for the night.

As Biggie’s “Hypnotize” seranaded the court post-game, I couldn’t think of a better way to start to the season. The ball movement from Kidd, Prigioni and Felton was a startling reminder of what we lacked last year. Another key aspect is that we closed every quarter strong. Last season, the Heat always picked us apart in the last minutes of quarters. This time, we met every run with timely shots that had them discouraged for a change.

The great thing about last night is there’s still room for improvement. On the injury front, we still have the returns of Shumpert, Camby and Stoudemire to look forward to. Melo dropped 30, but he got a little out of sorts in the second half by gunning and forcing too many shots. Once he reigns that in a little more and continues attacking the basket…watch out. JR Smith had one of his “brickhouse” games offensively, but made up for it by staying focused on defense (outside of a highly dumb offensive foul on a Kidd fast break).

Enjoy this win, fellow Knicks fans. We have another tough one tomorrow with division rival Philly. Let’s hope our squad continues to show the improvements and we don’t get a letdown.

Stay tuned for much more Knicks coverage as this site builds and gets off the ground fully in the next few weeks.