Madison Square Garden had begun to symbolize gritty and unselfish basketball via the Knicks’ five game home winning streak. That came crashing down tonight via Russell Westbrook and the rest of the Oklahoma Thunder, who bullied the Knicks on the boards and had their way in the fourth quarter to take a 112-103 victory.

Last game, the Knicks could use the excuse of weak legs on the second night of a back to back. Tonight could offer no such excuse as the Knicks shot an abysmal 40% from the field and got out-rebounded 53-40.

The bench disparity was huge. Enes Kanter had 27 points and 10 rebounds in 28 minutes. Anthony Morrow added 14 points. The entire bench combined for 58 points compared to 19 from New York. 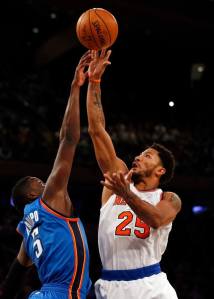 Derrick Rose (30 points, 7 rebounds), no doubt motivated by the Westbrook matchup, was the only Knick to have a great performance. In the fourth quarter, he was the only player that was aggressive and looked to attack in the paint. Porzingis (21 points, 9/20) and Melo (18 points,4/19) relied on the jumpers, which failed them both. It was especially disappointing for Melo, who started the game 3/5 and then went on to miss 11 of his next 12 shots (many of them at the rim).

Because of the size of OKC, Coach Hornacek gambled and had Joakim Noah (2 points, 4 rebounds, 4 assists) out there in crunch time. Aside from a good block on a Westbrook layup attempt, Noah couldn’t do much on the rebounding nor defensive end to stop Kanter and Steve Adams (14 points) from getting deep paint position. Noah had gained some goodwill from a few sweet lobs to KP in the first half, but his weak tip-in attempts gave me painful reminders of how ineffective Tyson Chandler was in his last Knick season.

Russell Westbrook was brilliant and the Knicks never matched his intensity. He ripped rebounds out the hands of our bigs like Porzinigs and Hernangomez, and his penetration provided easy rim looks for the OKC bigs. Westbrook had a triple double at halftime and finished with 27 points, 18 rebounds, and 14 assists.

The Knicks will look to find some reprieve on Wednesday in Minnesota against the equally struggling Timberwolves. 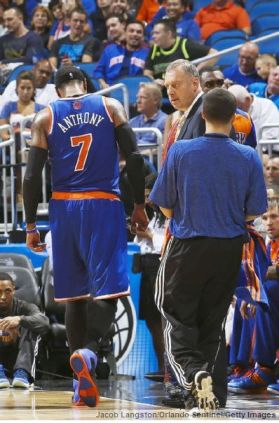 Carmelo Anthony is hopeful that he’ll be able to play in tomorrow’s big Christmas game against the Oklahoma City Thunder, but cautioned that the ankle injury he suffered against the Orlando Magic Monday night makes it a game-time decision.

Anthony, who’s second behind Kevin Durant in league scoring this year, explained that the ankle roll was not as severe as it could have been.

“I’m walking. I caught it before I rolled it all the way but it rolled pretty bad,” Anthony told the New York Post.

Anthony went up for an offensive rebound in the third quarter and landed awkwardly on a Magic player Tobias Harris, resulting in the rolled ankle. He received treatment on the bench and did not return to the game despite going to the locker room under his own power.

The Knicks and Thunder last met in April in a wild shootout game that saw the Knicks win behind Anthony’s 36 points and 12 rebounds. Durant chipped in 27 points. The win allowed Anthony to take the #1 scoring spot and eventually win the league scoring title.

Much as I’d love to see another Melo-Durant duel, I’d rather our best player sit this one out and get healthy. He’s been playing way too many minutes as it is and trying to guard Durant on a bum ankle will do his health no favors. As we saw in last night’s Magic game, this team is hopeless without him, so risking a situation where he has to miss further time is not smart.

With that said, Melo is a baller and since he’s been here, he’s always loved these Christmas games. I give it a 70% chance that he ends up trying to play.