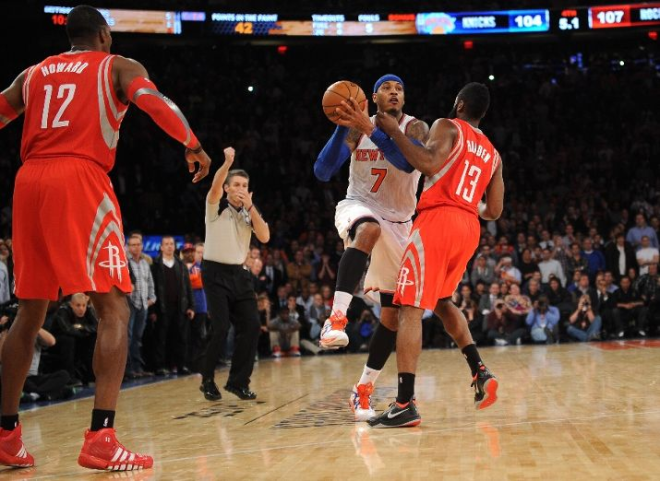 The Knicks played hard and got big efforts from Carmelo Anthony (45 points) and Andrea Bargnani (24 points), but ultimately their spotty post paint defense and several mental blunders down the stretch sealed their fate as Houston made it seven straight over New York with a 109-106 victory last night at the Garden. While the defense for both teams was akin to NBA Jam, it was the Rockets that showed a little more poise (and ref benefits) in the fourth quarter to squeeze this one out. On to my thoughts.

PAINT AND ARC WIDE OPEN: From the first few minutes, you could tell the team defense was going to be a huge issue in this one. Although the Rockets missed their first six three-point attempts, they were wide open shots and you knew eventually they’d start falling. Francisco Garcia hit an open one at the end of the first that put the Rockets up 28-23. And throughout the quarter, the Rockets took advantage of the Knicks’s weak transition defense to score easy layups.

The Rockets then started the second quarter on a 10-2 run predicated on the fact the Knicks were doubling Dwight Howard and not moving fast enough to close out on shooters. Chandler Parsons got in on the Knicks’s swiss cheese defense and in one stretch scored 11 straight points (including a wide open slam due to Bargnani’s slow help defense).

The third was featured another big Rockets run (10-0 midway through), and Knicks were clawing from behind again early in the fourth due to a 8-0 run while Melo sat. The Knicks indeed kept it close, but it’s extremely hard to win against playoffs teams when this many big runs are allowed over the course of a game. Jeremy Lin (21 points) got several open dunks late due to miscommunication and Harden’s constant driving earned him 36 points.

BARGNANI THE 2-WAY PLAYER: Bargnani built on his excellent Atlanta game Wednesday by not only scoring 24 points, but pulling Howard out of the paint and locking him up on the defensive end. Howard took the rebounding battle (15 to Bargnani’s 4), but he only shot 1-5 from the field and Bargnani provided a great lift for the defense by showing he could cover Howard by himself, allowing the three-point abuse to be stifled. Bargnani also succeeded in drawing several offensive fouls and blocking Howard’s shots.

You can see his confidence growing every game and his teammates are looking for him. That made it all the more frustrating that Bargnani didn’t get any shots during the last five minutes of the fourth quarter. The offense fell into Melo isolations which allowed Houston’s defense to get set. Yes, Melo is our best player and should be involved in all plays, but use of him as a decoy on certain plays makes the team much less predictable and dangerous.

MELO BIG EFFORT RUINED BY THE REFS?: Despite the bonehead play of intentionally fouling Howard under the 2-minute mark, Melo had a very good game with 45 points (56% from the field), 10 rebounds and four assists. He really should have about 55 points, as the refs showed clear preferential treatment to James Harden in giving him a phantom foul on a three-point attempt while Melo would get clearly hacked in the post to swallowed whistles.

The most controversial play was when the Knicks were down 104-107 with under 10 seconds left on the clock. They had forced a shot clock violation on Lin on the last play, and Melo got the ball and was fouled in the process of shooting a heave three that actually went down. The ref immediately waved it off and stated the foul came earlier. Judge for yourself.

From the below statement, Melo seems to have accepted he’s never going to get the benefit of the doubt on calls that even lesser players like Harden seem to get.

You see the way some guys get their calls, me, I got to get cut, you’ve got to see blood for me to get a call down there.

FELTON’S SLIDE CONTINUES: Raymond Felton is still having issues in every facet. He’s shooting 37% for the year and last night went 3-8 (8 points) and committed 5 turnovers. He can’t keep any guards in front of him and with Chandler missing and Bargnani still lost on help defense, the Knicks are getting exploited there to the max. It’s still early in the year and I haven’t forgotten how important he was to the team last year, but his improvement is vital to the team being able to tread water until Tyson Chandler returns.

HOPEFUL DEVELOPMENTS: If you look strictly at the numbers, things appear dire. The Knicks are 3-6 and have dropped their last 4 home games. But going behind the numbers, we’re seeing Melo’s shooting percentage rising and Bargnani emerging as a legit, dangerous and consistent scoring threat. It’s been a gradual and at times painful process to watch, but you can see spurts of the improvement and big potential.

Next up for NY are the Hawks again on Saturday night.