Midway through the third quarter, the Knicks were down 15 points and staring at the possibility of a fourth straight loss. But our Big Three of Melo, Rose, and Porzingis ignited a maelstrom of fourth quarter offense, scoring 32 of the Knicks’ 34 points to subdue the Pacers at Madison Square Garden.

From starting the game shooting a putrid 32%, and letting the ghost of Al Jefferson light us up for 18 points (14 in the first half), it was a frustrating game until the Melo went insane from behind the arc. He was 3/4 in the third, scored 15 points total, and single-handedly got the Knicks back in it by slicing the 15-point deficit to 84-87 headed into the fourth.

His scoring was so needed that Coach Hornacek switched up the rotation and had Melo start the fourth. After a few minutes, he got a brief rest as Rose and KP came back in. A Porzingis trey would tie it at 99. Another would put the Knicks up 103-101, and a Rose floater made it 105-101 to cap a 14-2 run. By then Melo was back in and effectively ended Indy’s chances with another three-pointer to make it 114-105 with 2:57 remaining. 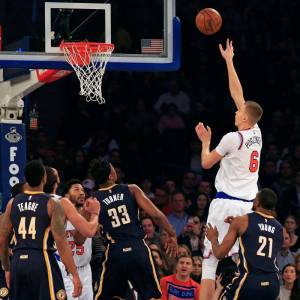 BIG THREE GOES CRAZY: Let’s look at these numbers a little closer, shall we? Melo had a season high 35 points, going a ridiculous 7/11 from downtown. Overall his was 13/25 from the field and 11 of those points came in the fourth. Derrick Rose had a slow start (1/5 in the first) marked by erratic passing (4 turnovers), but his fourth quarter penetration provided the open looks needed for KP and Melo to do damage. Rose finished with 24 points (50% FG) and 6 assists. And Porzingis not only provided scoring (21 points), but made some timely blocks at the rim in the fourth (3 for the game).

NOAH RESPONDS: A lot of Knick fans have called for Noah’s head during this losing streak. Only averaging 4 points on the season, the Knicks big man responded tonight with a high energy double double (11 points, 11 boards, 2 blocks). But what impressed me the most was Noah making consecutive free throws and ending up 3/4 from the line.

The Knicks still have a lot of ground to make up as the losing streak toppled them from third to sixth in the East. Next up is Orlando on Thursday, then an important Christmas Day showdown against the Celtics on Sunday.

Fun Fact — The Knicks are now 10-5 at home, good for the fifth best home record in the league.