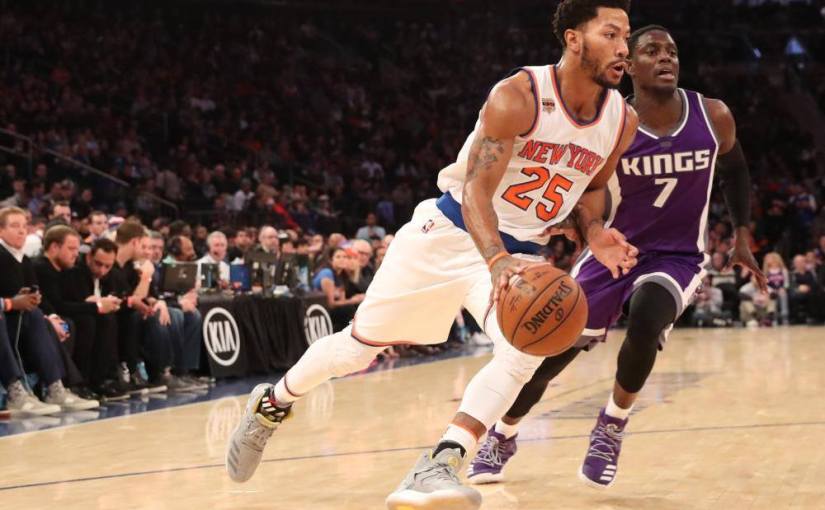 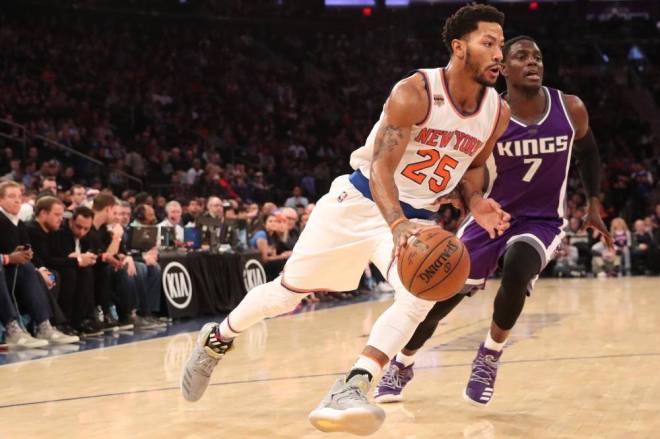 Tell me if you’ve heard this story before. The Knicks play well. The Knicks get a big lead. The Knicks then decide to stop playing defense. Said Knicks play a life and death fourth quarter to either win close or lose a heart-breaker. Thankfully tonight was the former, as the Knicks blew a 20-point third quarter lead but held on for a 106-98 win at Madison Square Garden.

A loss to the Sacramento Kings is unacceptable under any circumstances. And despite a bad shooting night from Kristaps Porzingis, the scoring and play-making slack was picked up by Derrick Rose, Carmelo Anthony and a season-high 19 points from Brandon Jennings.

SLOW BUILD: Early in the first quarter, the Knicks were going through the motions. KP was 0/4, and lackadaisical defense had the Knicks in the penalty with 7:49 remaining. Then Derrick Rose took over with 10 points and 4 assists in the quarter to push New York to a 26-21 lead. The advantage ballooned to as much as 21 in the second quarter before the Knicks settled on a 55-41 halftime lead.

CONSEQUENCES FOR LAZY PLAY: It looked like the Knicks might finally get an easy night when they went up 70-50 early in the third. But right on cue, the Knicks stopped playing defense, particularly from the three-point line where DeMarcus Cousins burned them repeatedly. At one point, the Kings were on a 16-0 run in just over three minutes. The Knicks spent this stretch complaining about foul calls and turning the ball over. 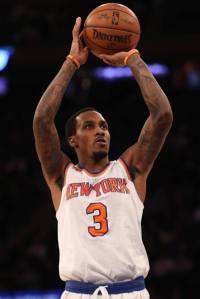 JENNINGS SAVES THE DAY: Tonight we needed his offense and BJ was up to the challenge. He hit a jumper at the end of the third to stop the Kings momentum and goaded Willie Cauly-Stein into a foul on a three-pointer. Jennings attacked the basket for a few timely layups and remained a fourth quarter threat from long-range. His offense powered a bench that scored 44 points.

PORZINGIS IMPACTS ON THE DEFENSIVE END: KP never seemed to get going. Cousins was physical with him early and that set the tone for a long night on the offensive end (6/18). However, Porzingis worked hard on the defensive end with 14 rebounds, and closed down the paint with 4 blocks. One of them was a crucial rejection in the fourth that lead to a Jennings layup and a 92-85 lead.

ROSE and MELO: D-Rose had a few too many reckless plays (4 turnovers), but as usual his attacking style paid off with free throws in the fourth. He simmered down from a hot 10-point first quarter, but remained a versatile contributor with 20 points, 6 rebounds and 6 assists. Melo took 20 shots, but the iso plays were limited. Not a single boo was heard and he even ended the Kings comeback chances with a circus shot layup over Cousins to make it 103-96 with less than a minute remaining.

BENCH WORK: Lance Thomas hit two open threes off kick-out passes. With this team, it’s looking like his role should be a “3 and D” guy. Willy Hernangomez had a nifty fake-out spin in the post that makes me think he’s been watching Hakeem Olajuwon tapes. Kyle O’Quinn continued his good play as of late — 4 points, 9 rebounds in 14 minutes.

NOAH: In 25 minutes, Joakim Noah managed 2 points and 5 rebounds. It was his first game back so I’ll cut him some slack, but we need him to get it together. If not, it’ll hard to justify his starting spot not matter the contract.