24 hours after Thanksgiving, the Knicks tried to give their fans a heart attack with a dramatic last-play win over the Charlotte Hornets. With Kristaps Porzingis struggling most of the game, the load was on Melo to will the Knicks to victory. He did, but not without timely plays down the stretch from Rose and Porzingis on both sides of the ball.

WHOSE TEAM IS THIS???: The rumblings had started again. “Melo is freezing out Porzingis.” “Porzingis needs to be the #1 option.” Last game we even heard boos when Melo went iso. Tonight, all that nonsense was silenced with Melo shooting and passing (gasp!) his team to victory. As Porzingis found himself limited by foul trouble and 2/6 shooting (5 points), Melo picked up the slack for his protegé with 16 points in the first quarter (6/8 shooting).

After falling behind by 13 in the third, a tech on Coach Hornacek seemed to ignite the Knicks, who reeled off a 15-2 run to tie it at 72. That run was driven by a Melo three-point play and a three-pointer. 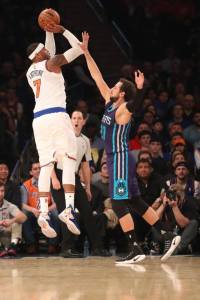 The extremely tight game saw trading hoops in the fourth with Melo again making big plays. He found Hernangomez twice for drives to the rim. And when the game went into overtime, Melo was the dominant offensive player with two jumpers, including the game-winning fadeaway, to cement the 113-111 win.

PORZINGIS AND ROSE MEET CHALLENGE: These two didn’t have great shooting nights, but Rose and Porzingis left their marks on this win. Rose (16 points, 5 assists) made Kemba Walker work on defense by being aggressive with rim drives in the fourth quarter and overtime. His bank shot that put the Knicks up 104-101 with 22 seconds left would have been the game-winner if not for a bonehead rookie foul from Hernangomez. And with three seconds left in OT, Rose’s block on Kemba Walker’s three prevented a heart-breaking loss going into the weekend.

Porzingis (16 points 6/16, 8 rebound, 2 blocks) had several threes in the fourth to put New York in the lead, but his strongest contribution was on defense. Two dramatic blocks at the rim on Cody Zeller and Frank Kaminsky in crunch time prevented Charlotte from building momentum. Although he was a -12, his aggression on defense was essential to holding off Charlotte.

QUIET PERFORMANCES: Hernangomez (6 points, 9 rebounds) got a lot of deserved grief for his dumb foul that sent the game into OT, but his overall play means all is forgiven. In 20 minutes, he was a +16 and ignited runs with his cutting to the rim.

Overall, the second unit had issues with Kuzmiskas being held scoreless (0/6) in 24 minutes, and Brandon Jennings not being able to push the pace with KP struggling. The Hornets’ bench outscored them 44-28 behind 32 combined points from Kamisky and Belinelli.

The Knicks won’t have much time to rest on their laurels as the back to back concludes tomorrow in Charlotte.