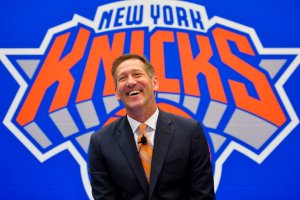 Having missed the playoffs three straight years, new Knicks coach Jeff Hornacek has much to address this off-season. In a quick interview with the New York Knicks YouTube page, he revealed that his primary concern is adding capable shooters around frontcourt stars Carmelo Anthony and Kristaps Porzingis.

Our starting backcourt shot a respectable percentage from three this season (Afflalo 38%, Calderon 41%), but the big problem was neither could consistently get their own shot and put the ball on the floor (Afflalo’s brief flashes of competency aside).

« [Video] Fat Joe Names Anthony Mason as Knicks Player from B.I.G.’s “I Got a Story to Tell”
Melo and Ninja Turtles Team Up for Comic Book »