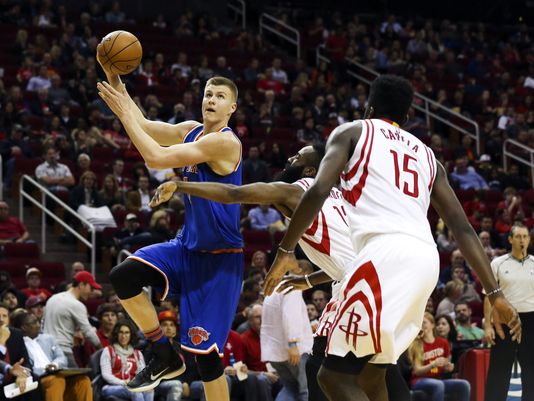 Who knew all we needed was some Latvian magic to break our streak of futility against the Rockets? Having lost the last 11 encounters dating back to 2004, the Knicks held tough and rode Kristaps Porzingis remarkable two-way performance to beat Houston 107-102.

Even without Dwight Howard’s presence, Porzingis still had to contend with an array of defenders like Terrance Jones and Trevor Ariza. But KP showed his versatility in punishing the Rockets with threes, deep jumpers and even running hook shots. Along with his 24 points, Porzingis added 14 rebounds (5 offensive) and 7 blocks, the first rookie to do so since Shaquille O’Neal in 1992.

Although Porzingis lead the way, it was a full team effort. Four of the five starters hit double figures, and Langston Galloway lead the bench with 12 points.

Games like this show another value to Porzingis’ potential that’s been overlooked. If he develops into the star we think he can be, that will add at least three more productive years to Melo’s career. Melo had a quiet night logging just 25 minutes (14 points, 50% shooting), but he didn’t need to push himself because KP handled the load. In years past, how often did we see Melo push himself through rough nights and get beat up because there was no help with the scoring load?

The scary thing is, we’re going to get nights where both Melo and KP are on fire. And when that happens, it’ll be a sight to see.