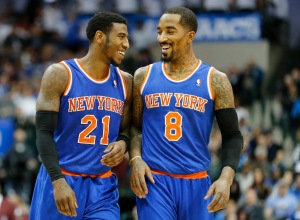 In biggest move of Phil Jackson’s tenure as president, the Knicks have agreed to dump over $20 million in salary by trading guards JR Smith and Iman Shumpert to the Cleveland Cavaliers.

Per the Associated Press, New York will get a second pick in 2019 from the Cavs. The Knicks will acquire filler players that they plan on immediately waiving. So far, the only confirmed one is rookie center Alex Kirk. The Oklahoma City Thunder will acquire Dion Waiters from Cleveland.

So long, homies. I have a lot of love for JR and Shump. At their best, I loved the brash, young swagger they brought to the veteran lineups we’ve had in recent years. But if I’m honest, it is very apparent that both players have reached their ceilings in New York. We’ve been waiting for about 2 years for Shumpert to make that “leap” as a second option which just isn’t his game (nor fair to expect from him). Since JR’s excellent 2013 season, we’ve only seen erratic flashes of the focus that made him the Sixth Man of the Year.

A change of scenery will be beneficial for both guys. Shumpert will get to focus on being the lock-down, wing defensive specialist that was his calling card. And JR can be a secret weapon/gunner off the bench. The Cavaliers at the very least get more entertaining with JR on their roster.

I’ll remember the good times. Once a Knick, always a Knick.