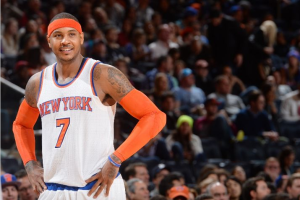 Carmelo Anthony joined elite company last night by scoring his 20,000th career point as the Knicks held off a game Charlotte Hornets squad at Madison Square Garden. It was another game where the Knicks had to execute down the stretch, something that was near impossible last season. But this squad is already showing the poise and grit that will be needed later in the season and hopefully beyond in the playoffs.

HOT SHOOTING: The Knicks shot over 50% for most of the game and applied some lock-down defense early on. Samuel Dalembert gave Al Jefferson fits for most of the first half, holding the All-Star to 1/5 shooting until a late burst in the final minutes of the second. There were isolation plays for Melo, but mostly the offense stayed the course with the triangle, allowing everyone  to a get a crack at open shots. This ensured that everyone stayed within the flow of the offense, patricularly our guards who need to keep their shooting touch. Amar’e Stoudemire also had a lively night as well, contributing 17 points and 10 rebounds (!!!).

A POTENTIAL BLOWOUT TURNS INTO A PLAYOFF-LIKE GRINDOUT: A 9-0 run in the second quarter put the Knicks up 15, and many thought the team might cruise to an early victory. The Hornets had other ideas and promptly went on an 20-7 run, making NY have to settle for a 52-50 halftime lead. From that point on, neither  team would go up more than three points.

LANCE STEPHENSON: As usual, Lance put on a show at the Garden and flirted with a triple-double (14 points, 9 rebounds, 8 assists). JR and Shumpert struggled to keep him out the paint on drives and off the boards. His dynamic play-making, including a driving layup in the closing seconds of the third to make it 80-79 Charlotte, was key in keeping the Hornets afloat.

KEY DEFENSIVE STOPS: With each team making timely 4th quarter buckets, the game had to be decided by defensive stops. The Knicks ended up with three crucial ones in the final minutes: Prigioni with an inbounds deflection off a Charlotte guard for a turnover, Melo with a similar strip past the three-point line, and Shumpert picking Stephenson’s pocket during a drive (the latter with less than a minute remaining).

Still, Charlotte had their chance at a game-winner. With the score 95-93 NY, Kemba Walker drove and got a clean look at the basket via a pump fake. The shot rimmed out, and Melo went 1-2 at the line to ice the game with just .8 remaining.

IMPROVEMENTS: The defensive energy was there, but our guards still need to improve with cutting off dribble penetration. Also, the team shot an abysmal 58% from the free throw line (10/17), making this game tighter than it needed to be.