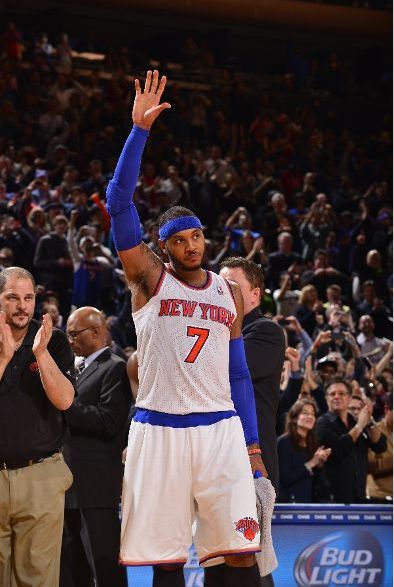 Earlier today, Carmelo Anthony confirmed his decision to resign with the Knicks for a five-year deal that will reportedly be under the maximum $129 million he could have received. With that move, Melo’s worth was immediately re-evaluated. From the perspective of Chicago Bulls fans, he transformed from the missing piece to their championship aspirations to an athlete simply concerned about money over a winning legacy. Knicks fans are mostly happy to have back our most consistent player, but there is a vocal minority among us who blame Melo almost exclusively for last season’s failures. Through it all, Carmelo Anthony is back with the Knicks, and despite what you’ll read from other disgruntled fan bases, it was the right move.

The Bulls are a well-coached team that has had their potential hampered by injuries to their most dynamic player (Derrick Rose) and a horrid contract (Carlos Boozer). For the last three years, they’ve failed to attract a consistent scoring threat to take some of the pressure off of Rose. In that regard, you can’t blame them for looking at Carmelo Anthony as a savior. In Melo, they would have one of the deadliest scorers in league who could thrive in the post, from mid-range, or as a catch n’ shoot option on the three-point line.

But if you look at it from the supposed “win now” angle that the Bulls were selling, problems start to arise. The first issue is Derrick Rose himself. Melo forced himself to NY three years ago on the gamble that his co-star, Amar’e Stoudemire, would be able to share the offensive load with him. That has been the furthest thing from the truth, with Stat having to undergo back and knee surgeries. Add to that the minute restrictions and we’ve seen Melo essentially be forced to carry the team.

How does that tie back to Rose? Consider the fact that as hobbled as Stat has been over the last two seasons, he’s still played more games than Rose, who went down early last season with more knee problems following a previously missed season for ACL damage. By coming to the Bulls, Melo would have basically put himself at the mercy of Rose’s health. If Stoudemire’s recent years have taught Melo anything, it’s that knee problems rarely go away. A move to Chicago presented a strong possibility of not only replicating his last few years in NY, but also with a substantial pay cut (over $30 million dollars).

2. STOP THE NONSENSE OF GETTING YOUR WORTH= “BEING GREEDY”

The only fan I excuse for having that “stars should take less money” mentality are teenagers who have yet to enter the workforce. I cannot fathom how any working adult can share that stance.

Let’s do a quick scenario. You walk into your job with a potential raise on the table after years of hard work, building your skills/resume etc. However, your employer tells you that it would be easier for the company’s tax bottom line if you not only didn’t take the raise, but took a pay cut. Most of us would balk at our salaries being reduced $5000 per year, let alone the millions we expect NBA players to give up. Remember — more money, more problems. Just because they have a higher pay grade doesn’t mean they don’t have higher expenses and family obligations to take care of.

I say all that to drive home the importance of this contract for Melo. At 30 years old, this is very likely the last time he’ll be able to generate money on this level. Furthermore, he’s one of the few players that deserves it based on his skills and level of play. Yes, he’s not as good as LeBron. But in a league where the likes of an Avery Bradley can command $8 million per year, are you really going to try to argue that Melo, who averaged 28 points and 8 rebounds last year, isn’t worth a max salary or close to it?

3. A TRIANGLE WITHOUT A DYNAMIC SCORER?

It’s no secret that Phil Jackson and Derek Fisher are looking to implement the triangle offense. Every championship version I’ve ever seen of the triangle had a dynamic scorer. Melo fits that perfectly. Yes, I understand the skepticism that he can adapt to it. However, those thinking Melo isolations were his idea need to remember the track record of his previous Knicks coaches (D’antoni, Woodson). Melo has yet to have a competent coach or system here in NYC. Not to mention, last year had several players post career-lows in scoring (Felton) and shoot awfully for the majority of the season (Shumpert, JR). Iso Melo wasn’t simply the first option — it was damn near the only option due to how inept our offensive sets were under Woodson.

Aside from the Bulls, Melo also had the Lakers and Rockets on his free agency list. LA is crippled by Kobe Bryant’s contract and have no prospects of improving their roster anytime soon. Outside of maybe getting Lala a few more movie roles, the Lakers made no sense. The Rockets would have been an interesting mix, but I believe watching Harden’s style of play flame out in the playoffs probably deterred Melo from seeing a Houston signing as really creating another “Big Three.”

Resigning Melo was just one of the steps on Phil Jackson’s agenda. As noted a few days ago, he’s begun looking at potential trades that can ship out the real albatross contracts on the books in Stoudemire and Andrea Bargnani. But unlike past regimes, Phil is being patient. He wants to develop our younger players and is totally against shipping out guys like Tim Hardaway Jr. just to rid the team of Bargnani or Stat.

Let Phil do his job. The man got rid of Raymond Felton for Christ’s sake. I have full confidence we’ll see another big move or two in the coming months and very likely during the season as well.