This Is Our Town! Knicks Destroy Brooklyn 110-81, Continue Playoff Push 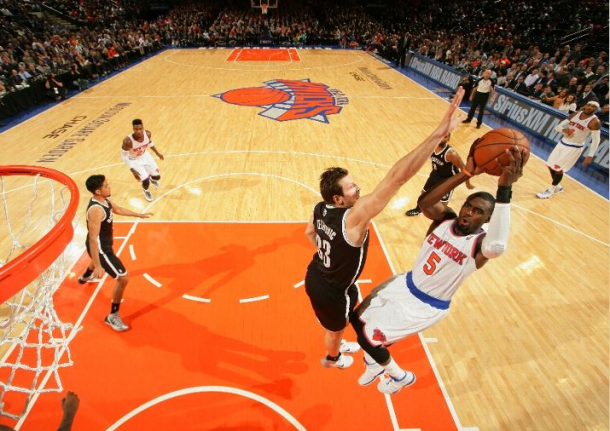 With the Nets having the best Eastern Conference record since January, a few Nets fans have started to become too vocal. Some even have the audacity to claim they’ve “taken over” basketball in New York. Well, the Knicks had to remind them of their status with a beatdown last night at Madison Square Garden. After going 3-2 on the recent West Coast trip, there is no room for error with less than 10 games left in the season. The Knicks needed to make a big statement on national TV and boy did they ever deliver…

67%: How hot were the Knicks to start? How about jumping out to a 29-20 lead after the first and shooting 67% for the entire first half to hold a 63-38 lead. The ball movement was strong and the Knicks fed the paint (31 points) via Stoudemire post-ups (13 points) and Melo. On the perimeter, Tim Hardaway Jr., Iman Shumpert, and JR Smith all had their jumpers flowing. In addition, all three attacked the old legs of Brooklyn (who were on a back to back without Kevin Garnett) with aggressive drives, including the best finish at the rim Shump has had all year.

BRIEF LITTLE SCARE: In the third, Raymond Felton came down hard on his back and ribs during a rebound, leading to some deep contusions in those areas. His injury seemed to spark a five-minute period of lethargy where the Nets were able to pull within 14-points. The surge was finally put to a halt by a Prigoni three, and key shots from Melo and JR Smith to push the lead back over 20 headed into the fourth quarter.

LOCKDOWN SHUMPERT: Despite picking up five fouls, Shumpert never wavered in his defensive intensity. Everyone he guarded was harassed and forced into bad leads. His work caused him to be a +29 on the court, to go along with 10, 3 rebounds and 2 assists in 24 minutes.

With Shump leading the defensive charge, the Nets were reduced to sub 40% shooting for the majority of the game.

NO PRESSURE ON MELO: All the big contributions allowed Melo to take a step back on offense. This allowed him to be highly efficient from the field (8/16, 23 points), get to the line (7/8), and focus on rebounding (10).

IN THE PLAYOFFS…FOR NOW: Atlanta lost to the Bulls last night, allowing this win to put the Knicks into the playoffs. The hold is still very tenuous — New York’s next game falls on Friday against the Wizards, followed by the Heat on Sunday.