[Video] INDEFENSIBLE: Knicks Disgrace Themselves in LA, Crushed by Lakers 127-96 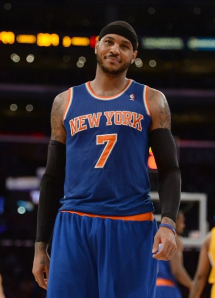 I hope it was the greatest alcohol and sex-filled party of all time on Monday night. That would be the only thing that could explain the embarrassing display of what the Knicks called “basketball” last night at the Staples Center, where they further sunk their playoff hopes with one of the worst defensive displays in recent memory against the Lakers. If you are a Knicks fan, the game was disgusting on many levels — the (lack of) defense, giving up early in the second half etc. etc. If you stayed up to watch this madness, I’m sure you’re still infuriated this morning.

51 POINTS IN 12 MINUTES: The Lakers set a franchise high by scoring 51 points in the third quarter. That mark of defensive futility is also a Knicks record for points given up. The Lakers had six three-pointers and stretched what had been a 8-point halftime lead to 30 by the start of the fourth quarter.

BENCH MASSACRE: The Lakers didn’t miss Pau Gasol or Steve Nash since the bench trio of Nick Young (20 points), Xavier Henry (22 points) and Kent Bazemore (18 points) destroyed the Knicks. Those three were a combined 10/14 from three-point land. From the starters, Jodie Meeks did the most damage, going 4/7 from downtown. In comparison, Tim Hardaway was the only competent Knicks player off the bench (from an offensive standpoint, anyway), scoring 17 points (5/7 FG).

The Lakers bench outscored their Knicks counterparts by 82-21.

HOPE UNCLE PHIL WAS TAKING NOTES: Our new president Phil Jackson was in attendance, and you just know his brain was spinning at how badly this team needs to be deconstructed. It’s been put out there this morning that Melo and Jackson had a sitdown meeting last night. I hope they both came to an agreement that damn near the whole team has to go by next season.

STILL ALIVE: Mathematically, the Knicks are still in the playoff hunt simply due to how the Hawks have been sliding recently. But honestly, does this game give you any enthusiasm about their playoff hopes, or their ability to be competitive should they make it? For them to come out this flat with what’s at stake and after the Cavs debacle shows this team’s mental focus.

The Knicks have little time to dwell on their embarrassment, as they visit Sleep Train Arena to face the Kings at 10 p.m. on Wednesday night.