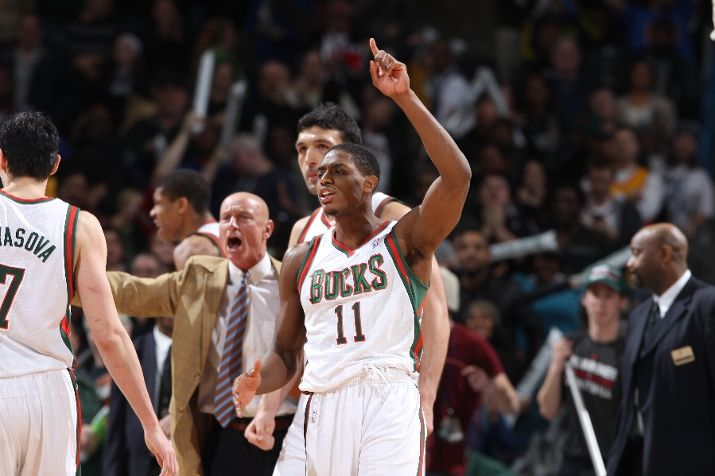 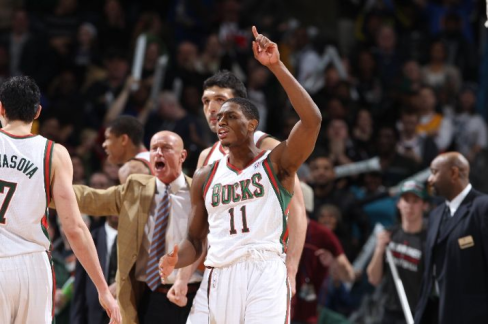 It finally happened. After going life and death twice with the NBA-worst Bucks this year (blowing a 20-point game in the first game and needing double overtime to win the second), the Knicks finally hit rock botttom in losing a heart-breaker off a Brandon Knight three-pointer with 1.5 seconds left. The defensive was uneven all game, but the Knicks rode the back of Carmelo Anthony in the fourth to nearly win before our “point guard” Raymond Felton gave up back to back baskets to seal this defeat. And with the schedule coming up being a Western Conference trip against the likes of Portland, Denver and Oklahoma City, the Knicks face a strong possiblity of falling further out of the playoff hunt.

BACKCOURT BLUES: Small ball is supposed to be our specialty, but it sure didn’t look like it between our starting backcourt pf Raymond Felton and Pablo Prigioni, who managed a combined six points on 2/9 shooting.

A DIFFERENCE IN DOUBLE FIGURES: On the scoring front, it was all Melo (36 points, 52% shooting) and JR Smith (30 points). No one else on the team managed to score in double figures. Contrast that with the Bucks, who had five players in double figures, including a team-high 25 points from Brandon Knight.

TRASH FREE THROW SHOOTING AND PERIMETER DEFENSE: The Knicks gave away points at the line, shooting just 62% (15/24) with Tyson Chandler being the biggest culprit, shooting 1-6. After building a 29-22 lead in the second, the game became a come-from-behind race for the Knicks after giving up 32 points in the quarter and letting the Bucks go 5-5 from downtown.

FELTON: The last two Bucks possessions are the biggest indictment of Raymond Felton’s defense. First, he got beat on a backdoor play that made it 98-95 Bucks with 27 seconds remaining. Melo then drained a three-pointer from 25 feet to tie it with 19 seconds left. Knight promptly brought the ball up and knocked down a three-pointer over Felton to make it 101-98 with just 1.5 seconds left. Melo missed a 27-footer to seal the defeat.

Felton is a good guy on a personal level, but a lot of the team problems begin at the point guard position. He can’t penetrate consistently, starts our offensive sets too late, has a streaky jumper, and most damning, can’t stay in front of athletic guards. When it comes to trades, a competent PG should be the #1 priority for New York.