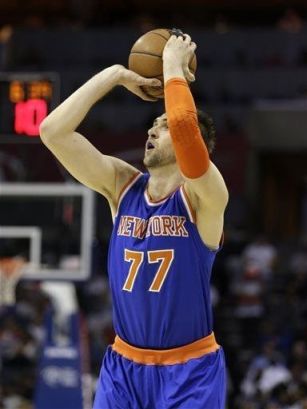 Knicks forward Andrea Bargnani is now out indefinitely after being diagnosed with a torn ligament in his left elbow.

Bargnani suffered the injury while attempting a dunk in the third quarter of an eventual 110-106 defeat to the Sixers. Bargnani was undercut on the dunk and landed awkwardly on his elbow. He remained in the game until early fourth quarter.

Bargnani had played in every game this season, averaging 13 points and 5 rebounds.

So how many bigs do we have left? With Stoudemire and K-Mart out, we’re left with Tyson Chandler, Jeremy Tyler and Cole Aldrich. Coach Woodson isn’t high on giving the latter two significant minutes, but we don’t have much choice at this point. The “indefinitely” tag has me worried we won’t see Bargs back until after the All-Star break.