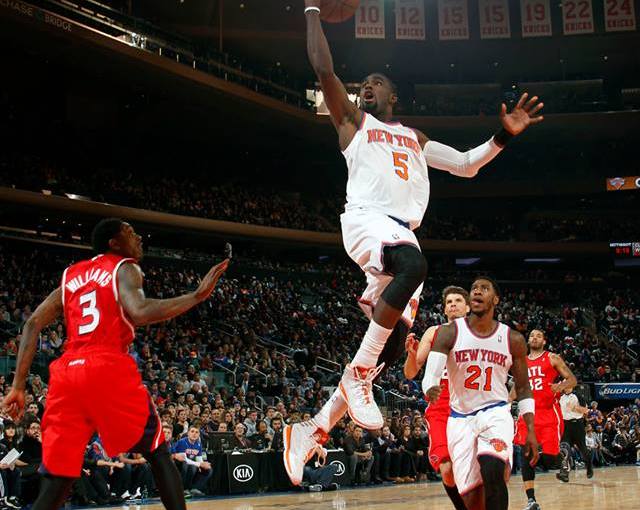 The Knicks overcame the heartbreak of Friday’s defeat in Boston by putting together a wholly efficient offensive performance to take a 111-106 victory over a red-hot shooting Atlanta Hawks team at Madison Square Garden. Outside of one moping player, all was well in NYC last night.

GOOD AND BAD DEFENSE: The Knicks did an excellent job of disrupting the Hawks offense with deflections and steals. They forced 12 turnovers in the first half and 27 for the entire game. It was completely necessary to offset the scorching shooting of the Hawks, who shot around 60% for most of the game. The percentage was due to the inside dominance of Paul Millsap (18 points, 8 rebounds) and Al Horford (17 points, 6 rebounds) coupled with the Knicks guards amazingly losing Kyle Korver on the perimeter (13 points, 4-9 from three).

THE SPARKS: We know Melo will get his, but the question with this Knicks team is who backs up our star player. Last night it was Tim Hardaway Jr. (13 points) who was aggressive getting to the rim for several dunks in the first half. Stoudemire (9 points, 5 rebounds) had a quieter game by his recent standards, but his output was great in getting the Knicks breathing room in the second quarter despite the Hawks shooting around 56% in the first half.

MELO THE FOCUS BUT TEAM EFFORT: The second half is where the team has had problems and in the third bad defense reared its ugly head. The Knicks had a 62-48 lead after the first few minutes, but left Korver open for back to back treys to help ignite a 15-6 run. ATL could not miss from the perimeter and were just behind 81-77 going into the fourth.

Up until that point, Melo had shot 9/15 from the field. There were a few rushed shots from him, but outside of that the team made his job much easier. Prigioni was dishing sweet passes to Melo and Bargnani. And speaking of Prigioni, his shooting kept the defense honest, dropping 11 points (3-6 from downtown). This gave NY a nice 15-point cushion late — under those cirmcumstances, Melo’s heat-check three, which went in to make the lead 106-93, was welcomed. Melo ended with another good stat line of 35 points, 6 rebounds and 4 assists.

The reason for the seemingly close score was Atlanta hitting four straight threes in less than two minutes of garbage time.

SULKING JR: Although JR Smith got the starting assignment at small forward, he managed just 1-8 from the field in 24 minutes (benched for all of the 4th). He looked like he was at a funeral on the sidelines with Prigioni trying to console him. This comes on the heels of JR just attempting one shot against Boston.

A lot of fans are ready to ship JR out, but my memory is not short. His bench play last year was key in our team finishing at the second seed. With the knee surgery, I’ll give JR at least until the All-Star break to get it together.