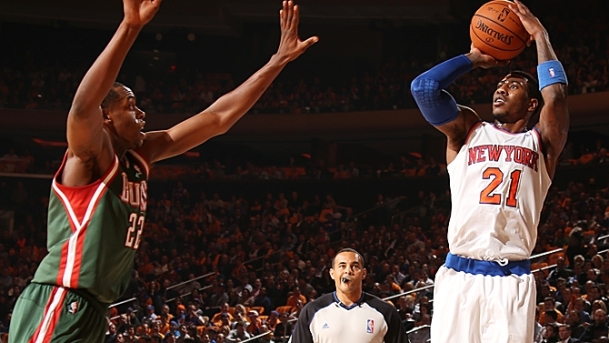 The Knicks got a lesson on the importance of closing out teams last night as they ended up in a seesaw battle in the closing minutes of the fourth quarter in fighting off the Bucks to a 90-83 victory.

After a first half which saw the Knicks dominate defensively (forcing 16 turnovers) for a 56-31 lead (punctuated by a 32-13 second quarter), New York would only score 34 points in the second half while giving up an astounding 33 points in the third quarter! It would have been great for the starters to rest considering the Bulls await them tonight, but this dogfight may just be what the team needed.

STRONG BACKCOURT: Coach Woodson went with the 2 point guard backcourt of Raymond Felton and Pablo Prigioni. The Knicks caught a big break when Bucks guard Brandon Knight left the game two minutes in with a strained hamstring. Luke Ridnour also didn’t play, ensuring the Bucks offense would be stalled in parts without their point guards. Felton executed several excellent fast breaks off steals and had his jumper working to the tune of 18 points. There was a brief scare with him having to leave the game due to a strained hamstring, but he worked through it.

Prigioni was his usual pest on defense, notching 3 steals and keeping the ball moving with 5 assists. Iman Shumpert started slow (0-3), but began showing the range and even finishing at the rim (a problem for him last year). Shump ended up with 16 points.

FLAT THIRD QUARTER: The Knicks came out very weak. This was an issue last season where the guys just seemed to get unfocused on their rotations. Before you knew the it, the lead went from 18 to 11 to single digits. The stupid fouls contributed to the Bucks getting easy baskets as well. Melo looked to get teammates involved, but several wide-open jumpers were missed and the Bucks continued to surge.

4TH QUARTER SCARE AWAKENS MELO AND CHANDLER: Caron Butler had a solid game for the Bucks (14 points) and managed to tie it with 4:30 remaining off a three-pointer. Milwaukee even took the lead off a John Henson free throw (81-80). From there, Carmelo Anthony and Tyson Chandler were the catalyst for a game-sealing 10-2 run. Prigioni got a steal for a fast break, leading to Melo missing a layup and Chandler putting home a putback dunk. Melo then scored on his next two plays, a tip-in and a post-move, to make it 86-81. Another Chandler dunk made it 88-81 and effectively iced the game. Melo finished with a solid double-double of 19 points (7-16) and 10 rebounds. Chandler added 6 points, 10 rebounds and 5 blocked shots.

BARGNANI BOOED: Based on this game, the New York faithful won’t have much patience with Andre Bargnani this season. He struggled with his shot and defense for most of the game and finished with 6 points (3-9 shooting) and 2 rebounds off the bench. He was unsure of himself and that’s one thing NY doesn’t tolerate. To be fair, he’s still learning the offense and I’m willing to wait 25 games before pulling out the pitchforks.

BETTER EFFORT NEEDED AGAINST CHICAGO: The Bulls smacked around the Knicks every game last year. NY will have to be much better tonight if they hope to get a win, as Chicago is having their season-opener with Derrick Rose returning. We’ll see how the lineup tweaks work with Amar’e Stoudemire getting burn tonight. Game starts at 8 p.m. ET on TNT.