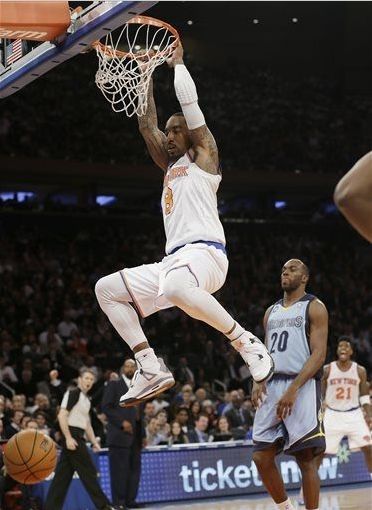 Could the Knicks have been any more bipolar tonight? Leave it to my beloved squad to deliver the best first half of this season only to flush it right down the toilet with an abominable second half. Luckily for New York, their dominance in the first two quarters was enough of a cushion to give them an important win to extend the winning streak to six games. Yes, a win is a win, but I still watched the entire second half pissed off.

FIRST HALF BRILLIANCE: It cannot be overstated how phenomenal the Knicks were over the first 24 minutes. The offensive blitz started behind the hot hand of Iman Shumpert, who scored 13 points just six minutes into the first quarter. He hit three treys and had his mid-range jumper working as well. Although Grizzlies center Marc Gasol surprised everyone by playing despite suffering from an abdominal tear, the Knicks made it a point to go right into the teeth of their defense with aggressive layups courtesy of Carmelo Anthony and JR Smith, who had 11 points each in the first quarter to give the Knicks a 37-25 lead. In addition, the team shot a scorching 72% from the field.

With Melo resting to begin the second, the ball movement got even better with JR manning the second unit. Steve Novak delivered 9 points on three treys while Jason Kidd found JR for a monster alley oop dunk to extend the lead to 58-34. Raymond Felton and Shumpert added more three-pointers and by halftime the Knicks had a 69-41 lead. Smith had 23 points off the bench to lead all scorers, and the field goal percentage for the team was still high at 61%.

With how great things were going, apparently the Knicks could only go down in the second half…

A GRINDING HALT AND REPLAY OF THE KNICKS’ FIRST DEFEAT: Remember when the Knicks lost to Memphis way back in November? In that game, the Knicks also shot roughly 60% in the first half, but fell apart in the third and earned several technicals for complaining. Nearly the exact same thing happened tonight with Marcus Camby getting tossed for cursing out the refs after picking up quick fouls. Shumpert and Kenyon Martin were forced to sit with 4 fouls apiece, and this quarter dragged on and on as the Grizzlies were able to live at the line (14 free throws in all) to outscore the Knicks 29-17.

The beautiful ball movement that marked the first half had degraded to repeated isolation plays and long jumpers. With this being the second night of a back to back, you’d think fatigue might have played a factor. But it was clear that this bad quarter was simply the result of the team getting too relaxed with their big lead, which had wilted to 86-70 entering the fourth.

ANOTHER LONG QUARTER: This game should have been put away early in the fourth and at first it appeared that was going to be the case. JR Smith kicked off the first Knicks possession with a three-point play on a fast break. But then Jerryd Bayless, another bench player like Toronto’s Alan Anderson that seems to get fired up to play New York, started hitting some timely three-point shots to pull his squad to within 10 (89-79). Melo didn’t do the team any favors by earning his own technical for complaining about a missed foul inside, but he made up for it later by hitting back to back jumpers to extend the lead to 100-86.

Still, the Grizzlies refused to go away and the Knicks kept giving them chances. Unbelievably, they cut the lead to just five (100-95) before Jason Kidd was fouled on his only made shot, a three-pointer, to earn a four-point play with 1:29 left. There must be something about four-point plays that rattle Kidd because he missed this one just like he did in the second Nets game. The Grizzlies had a little life and they used it over two timeouts, but JR’s free throws to make it 106-99 with 26 seconds left finally iced the game.

JR GOES OVER 30 AGAIN: How about JR Smith dropping over 30 points on back to back nights? The best thing about these games is how JR is staying in control and continuing to not settle for jumpers. I can count on one hand how many contested, outside jumpers he took. I never thought I’d be saying Melo could learn a thing or two from JR’s new approach. If Smith keeps this up, he’ll not only win Sixth Man of the Year, but ensure the Knicks lock up the Atlantic Division and the #2 spot in the East.

GOOD DEFENSE UP FRONT, BAD DEFENSE IN THE BACK: I was worried about how the Knicks would handle the Grizzlies’ big frontline, but the team did very well in that department. Kenyon Martin did good work on Marc Gasol (13 points) and Zach Randolph (3 points), and Melo held his own when he got those assignments (even drawing two offensive fouls on Randolph).

The backcourt is where the Knicks got some punishment, with Mike Conley (26 points), Jerryd Bayless (24 points) and Tony Allen (18 points) all going off at different points. Luckily for New York, Felton made up for some of his bad turnovers with 13 points overall and some key drives to the rim in the fourth.

The Knicks are still in second place in the East with a small lead over the Pacers, so it’s a welcome sight that the next game is against the lowly Charlotte Bobcats at home. With that said, it was a tooth and nail battle against them in December with the Knicks needing a JR game-winner. Let’s hope the “Friday Night Knicks” curse doesn’t rear its ugly head.