My season ain’t over,” Wallace told reporters when the team was in London in January. I’m going to be back. I was laid off for three years, so one little foot injury ain’t going to stop me. I’m good. – Rasheed Wallace in January 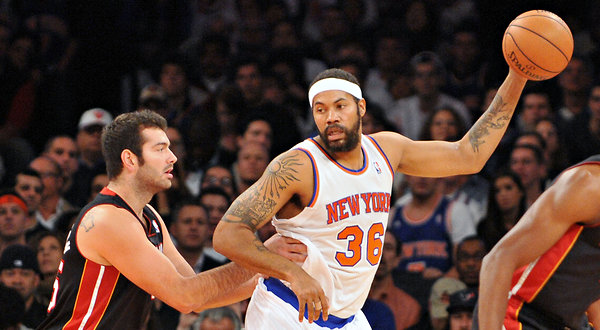 The mystery of whether Rasheed Wallace would return soon the Knicks has ended with the announcement the All-Star forward will undergo season-ending surgery on his left foot.

Wallace’s most recent X-ray found a fracture in his fifth metatarsal and a scheduled surgery for next week has an eight-week recovery time.

Wallace has been out of the Knicks lineup since December 13 with that was initially called a “stress fracture.”  Although both Wallace and the Knicks management maintained that a return was imminent, Wallace had only been able to do light running since the injury.

Early in the season, Wallace’s outside shooting and defensive presence helped the Knicks storm out to a fast 17-5 start. During his 20 games played, he averaged 7 points and 4 rebounds.

At press time, it’s not known if Wallace will attempt to play in the post-season.

So we waited 2 months for an even more severe injury? What happened? Was Sheed brawling in some NYC bar and messed up his foot further stomping someone’s head in? Slipped in the shower? Fell down stairs? I’m just completely dumbfounded how the simple running messed his foot up further.

Thank God the Knicks made that move for K-Mart, because our frontcourt defensive presence and rebounding is in sore need of a boost (especially with the prospect of facing Boston or Chicago in the first round).

My gut tells me the Knicks knew well beforehand Wallace was likely done. Let’s hope we don’t have a similar situation when it comes to Marcus Camby’s comeback.