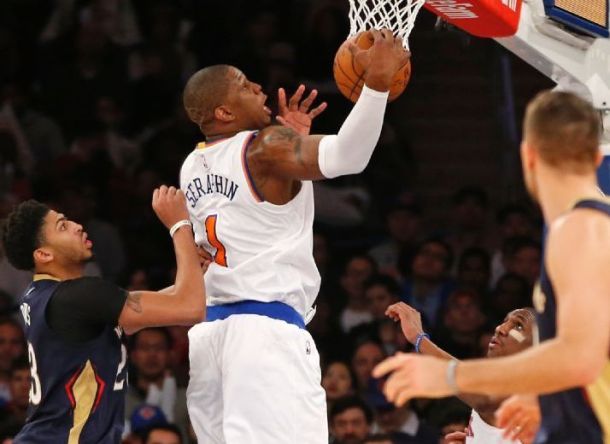 NEW YORK –  We got another home win! There were some nail-biting moments in the fourth, but it was the Pelicans who struggled more in crunch time as the Knicks rode huge efforts from Carmelo Anthony and Kevin Seraphin to hold off the Pelicans 95-87. Coach Fisher still have lots to work out in regards to rotations, but our group is remaining confident and making the most of their minutes.

SERAPHIN STEPS UP: The Knicks need a “X-factor” contribution every night to win most games, and on Sunday that came from Frenchman Kevin Seraphin. No doubt inspired by the recent tragic attacks in his country, Seraphin provided 12 points which helped offset a monstrous performance by Anthony Davis (36 points, 11 rebounds, 4 blocks). Seraphin shot 6/8 and hit some clutch fourth quarter shots on Davis, which I believe slowed The Brow down enough to help New York slip away.

MELO UNDER CONTROL: Carmelo Anthony had one of his most complete games of the season, notching 29 points on 52% shooting to go with 12 rebounds. He got seven free throws, stayed aggressive going to the basket, and was smart with his long and mid-range shots. When he missed a few in a row, he made sure to look to get teammates involved and didn’t force matters.

PORZINGIS FEARLESS IN SCHOOLING: Our rookie got abused by Davis more often than not, but he stayed aggressive and looked for his shot all night. This was in spite of Davis blocking him several times.

We’re now hovering right below .500 again as the Hornets come to town Tuesday night. We better be looking for revenge.