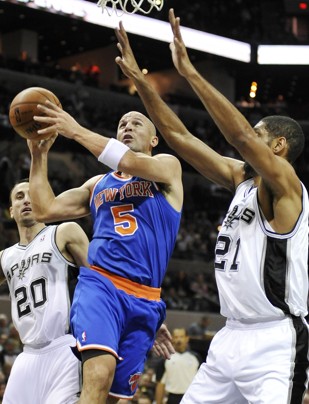 “It shows me this team is for real. We beat a great team tonight.” – Knicks head coach Mike Woodson

If there were any remaining non-believers, the Knicks effectively dispelled those naysayers last night in San Antonio, executing stifling defense and exceptional guard play from Jason Kidd and Raymond Felton to lift the Knicks to a 104-100 win over the Spurs.

The matchup had the intensity of a playoff game from the start; both teams came out taking quality shots and passing well. Felton scored the Knicks first 5 points and you could tell early on he had a point to prove taking on Spurs all-star Tony Parker. For the first time this season, Carmelo Anthony couldn’t get off to a fast scoring start due to quick double teams and physical play from DeJuan Blair. However, Melo showed excellent passing out of those double teams to give the Knicks a tight 33-31 lead after one.

The Knicks got some breathing room early in the second courtesy of JR Smith hitting a jumper and scoring with a drive into the lane. Pablo Prigioni hit a pull-up jumper, and Steve Novak and Rasheed Wallace hit three-pointers to push the lead to 45-38. Melo continued his great passing; he found JR for another drive into the lane that this time resulted in a three-point play.

Tony Parker picked up his game late in quarter, getting several fouls as Felton had issues keeping in front of him. The free throws got the game close and San Antonio finished strong with a contested three-pointer at the buzzer from Danny Green to give the Spurs a 54-52 halftime lead.

The calls started favoring the Knicks in the third, resulting in the Spurs already being in the penalty by the seven minute mark. Unfortunately, the Knicks were having problems at the line and finishing at the rim (Chandler, Brewer, Melo). The Spurs sensed blood and tightened their D for several fast breaks, one of which ended in a Jackson three-pointer. The Knicks finished the quarter cold with one too many JR isolation plays and a 74-76 deficit into the fourth.

A Novak airball for the eighth straight three-point miss was a dubious start, and inexcusably bad defense from Tyson Chandler lead to Tiago Splitter reeling off 13 straight points inside to start the quarter. The guard penetration from Manu Ginobili and Parker supplied Splitter with these opportunities and it looked very bad for the Knicks, who went down by 12 points (77-89) with seven minutes to go.

That’s when Felton and Kidd took over. Felton drove for a layup on Parker to bring the Knicks within 10. The New York defense held, one of which was a steal from Kidd, which lead to the veteran hitting back to back threes to put the Knicks right back in it down four (85-89). Ginobili stopped the run with his own three-pointer, but the Knicks came right back with a sweet Melo pass resulting in a Chandler three-point play off a dunk. Felton and JR would both score in the lane to bring the Knicks closer.

The best sequence came off another Kidd steal to ignite a fast break. Kidd passed to Melo on the wing, who drove to elicit a double team and kick to Felton under the rim, who passed back out to an open JR Smith for a three-pointer and a two point lead (97-95). Another stop would lead to a Kidd dagger three-pointer, and Tyson would put the exclamation mark on the game with a put back dunk off a Felton miss to ice the game with a 102-95 lead with a little over 30 seconds remaining. The Knicks closed out with a 22-11 run.

For us Knicks fans, this was a beautiful game to behold. Last year before Woodson, we would have given up once the Spurs pushed it to 12. Instead, we fought back and snatched their hearts out. Jason Kidd’s value to this team cannot be stressed enough; without him we’d have about three losses already. And Raymond Felton… let’s hope that man keeps that chip on his shoulder for the rest of the year. Great effort by everyone. I loved how Melo had faith in his teammates when his shot was not falling. He focused on passing , defense and made sure to not be a liability out there. We can only hope to see the same from Amar’e when he comes back.

We head right back into the fire tonight on ESPN against the Grizzlies, who’s frontcourt of Marc Gasol and Zach Randolph will be a huge mountain for our tired legs. I can’t wait…